Today I finally finished painting this Inquisition agent for Warhammer 40,000 / 'Inquisimunda'.  It was strange going back to 28mm scale after many months of 15mm painting, but I found the detail work a lot easier!  This is Issla Black, a pariah in the entourage of Inquisitor Augustus Dissero Isiah.  Her soulless psychic-null-effect is much valued by the Inquisitor & his other agents.  Issla is young & much less experienced than many of her comrades, so combat-wise she won't excel as highly.  Nevertheless, she is armed with a pair of stub pistols, & knows how to use them.

This figure is one of the many fantastic sculpts from Hasslefree Miniatures - Dionne (b) from their Modern Adventurers range. 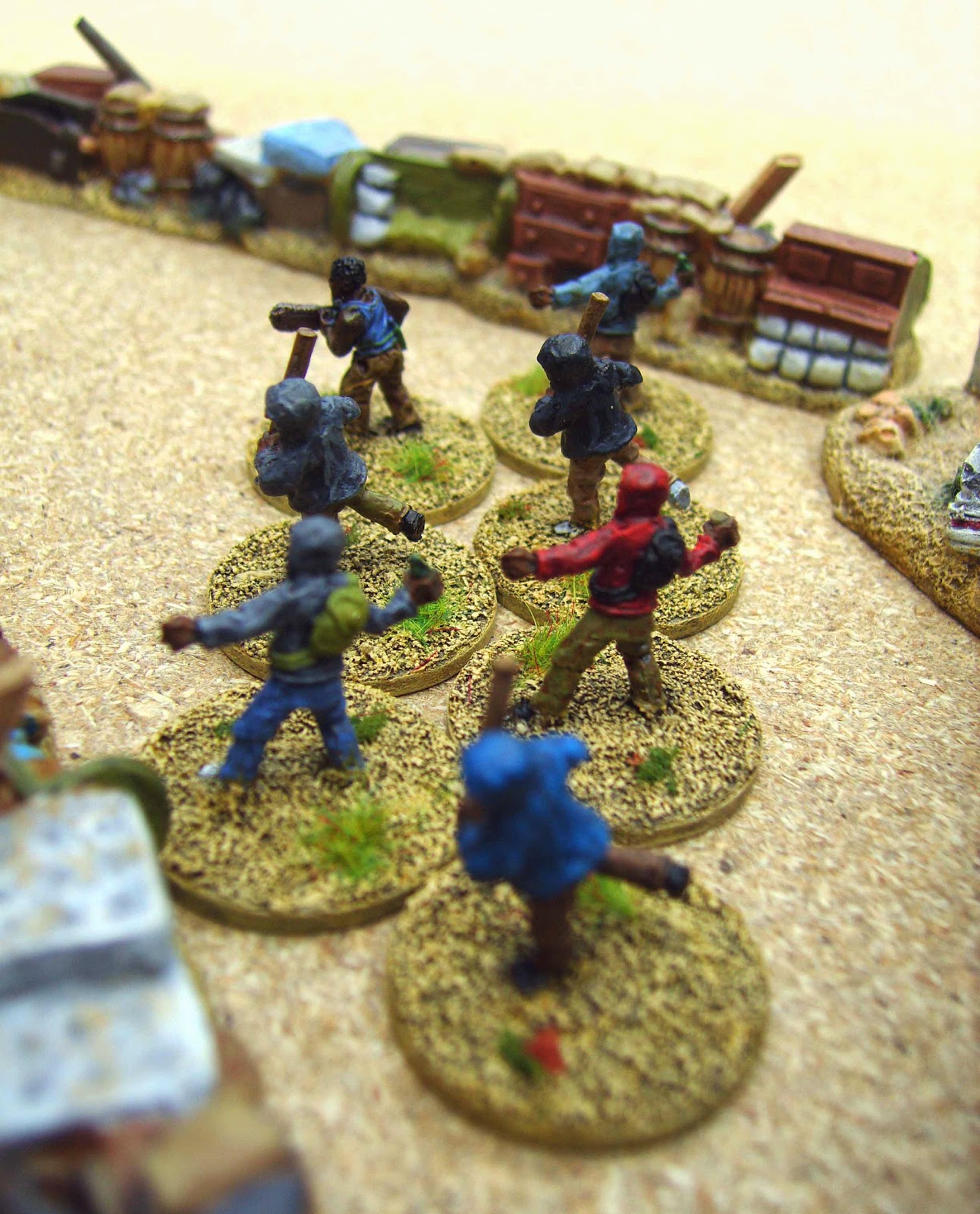 This week I painted up some 15mm scale hostile Somali civilians.  I will use these (alongside Somali gunmen) in Mixed Mobs for 'Day of the Rangers' Force on Force scenarios.  My next batch of single-based Somali civilians will be less actively hostile, & will include some female figures in traditional African dresses.  Mixed Mobs are a challenging prospect for the UN / US player, as he will want to avoid civilian casualties where possible, but when faced with armed militia amongst groups of civilians, this becomes very difficult. 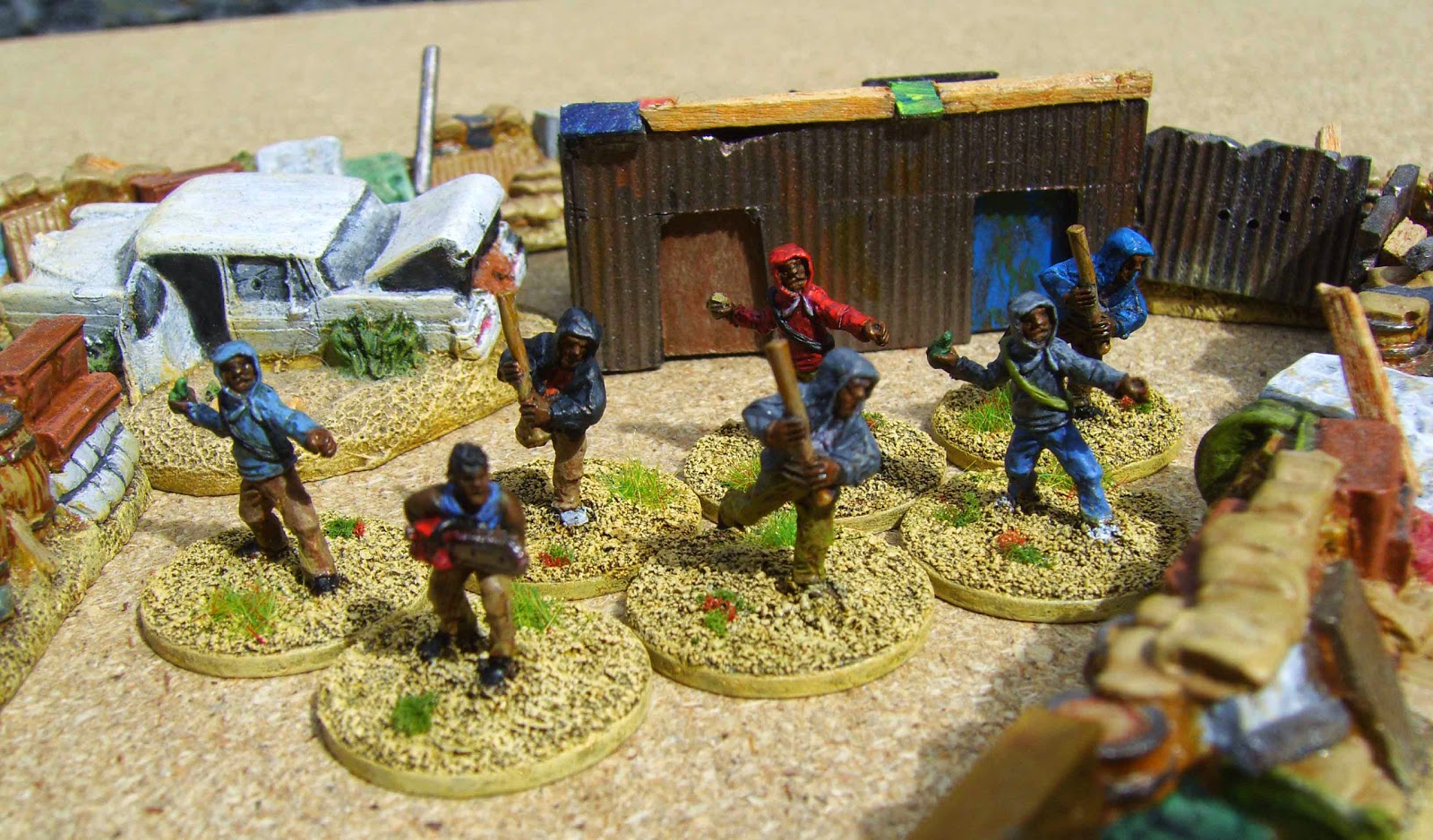 The figures are mostly Rebel Minis Modern Rioters, which are excellent sculpts with very realistic proportions; although their hoodies make them a bit more suitable for Western/Northern unrest settings.  I have saved the figures with placards for use on Hostile Mob bases, whilst there is another variant in the pack wearing a trenchcoat that doesn't fit the African setting.  The mini with the chainsaw is from the Peter Pig AK 47 Republic Range Looters pack.
Posted by Pawn Cocktail at 15:19 3 comments:

Today I finished a 'Tier One Personality' for Force on Force games in Somalia.  I was specifically thinking of Osman Atto (financier of Aidid's militia) when I was painting this figure, as there is a scenario of his capture in the 'Day of the Rangers' book; but I'm going to be painting-up a group of similar figures which can represent High Value Targets or hostages. 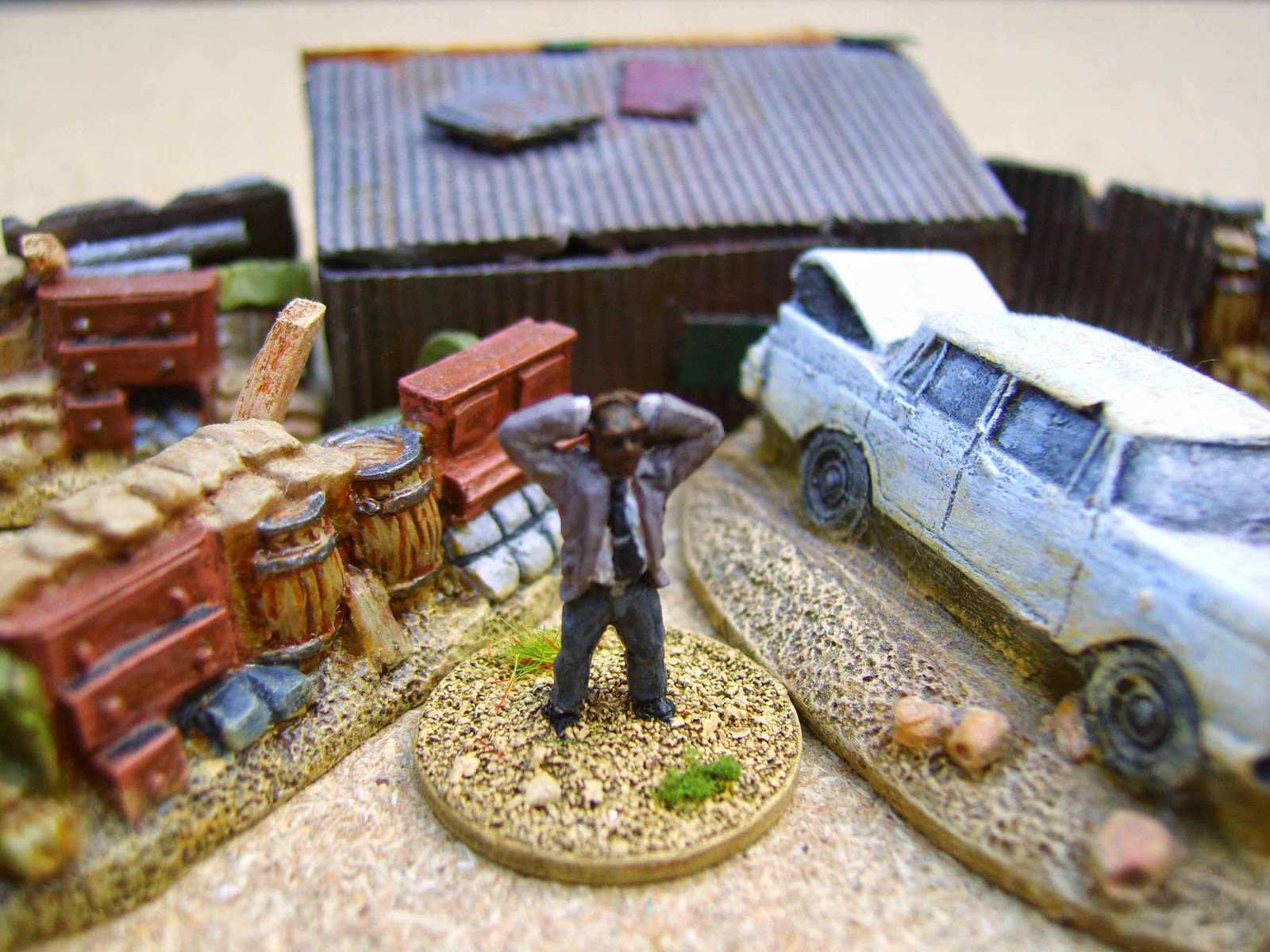 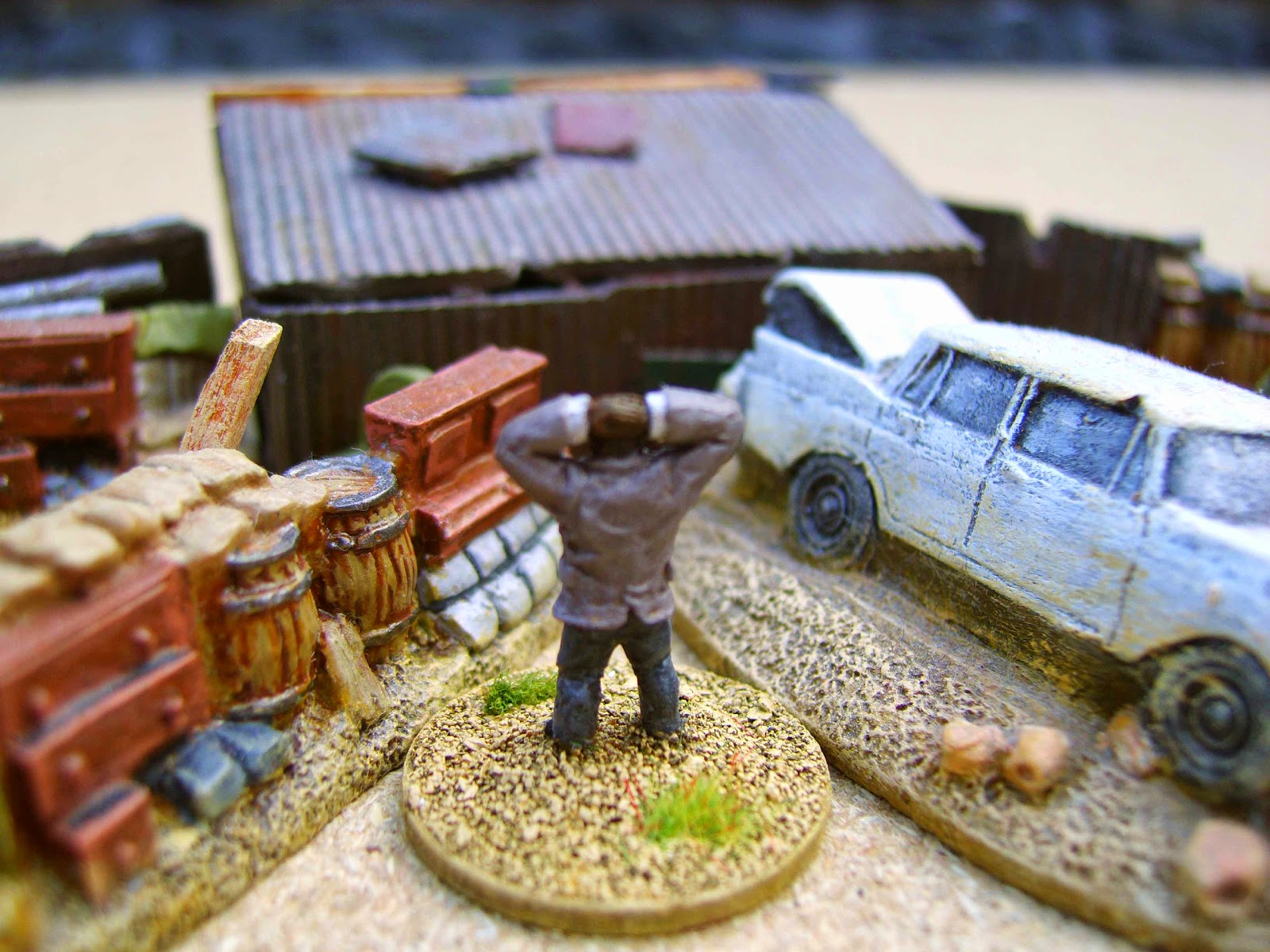 The figure is from the Rebel Minis 15mm Hostages pack.
Posted by Pawn Cocktail at 17:41 2 comments:

Email ThisBlogThis!Share to TwitterShare to FacebookShare to Pinterest
Labels: Africa, Force on Force

Here is my revised paint scheme for colonial militia in Tomorrow's War.  Based on feedback, I've reduced the diversity of colours (though I have kept the bright orange in the form of the base colour of the spots on the camo hood).  There's still a lot of colour on the figure, which is something I definitely want, but they are now mostly traditional forest tones.  I was a inspired by WWII 'autumn oak-leaf' Wehrmacht paratrooper camouflage for the hood. 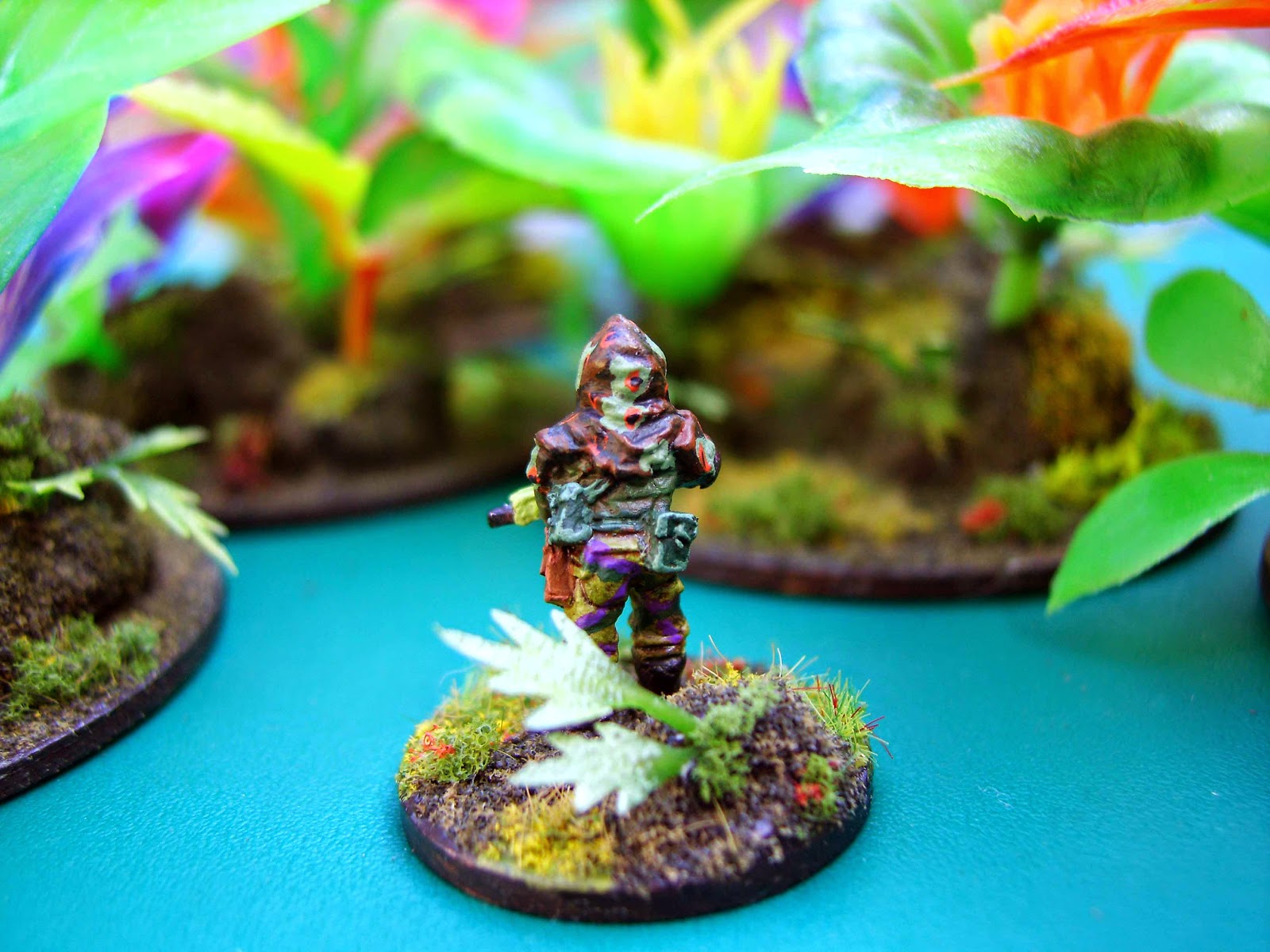 I think I'll go with this general scheme for my 'scratch' militia - keeping the hoods the same, but with variations in tops and trouser colour.  This figure is wearing captured UMC gear (trousers and some of his equipment pouches).  One aspect of my militia figures I haven't decided on yet is the goggles that some of them are wearing.  On other test minis, I have painted these in the same green as the gun casing & with red lenses, to match my colonial androids.  This is for a bit of uniformity, & to suggest similar manufacturing source.  However, this looks quite toy-like, so I'm thinking I may go with gunmetal and various coloured lenses.  I think the gun casing and lenses alone should be enough to visually link the militia with the combat droids.

As mentioned before, I am using Rebel Minis Sahadeen for my militia.  These are 15mm scale figures mounted on 1p bases. 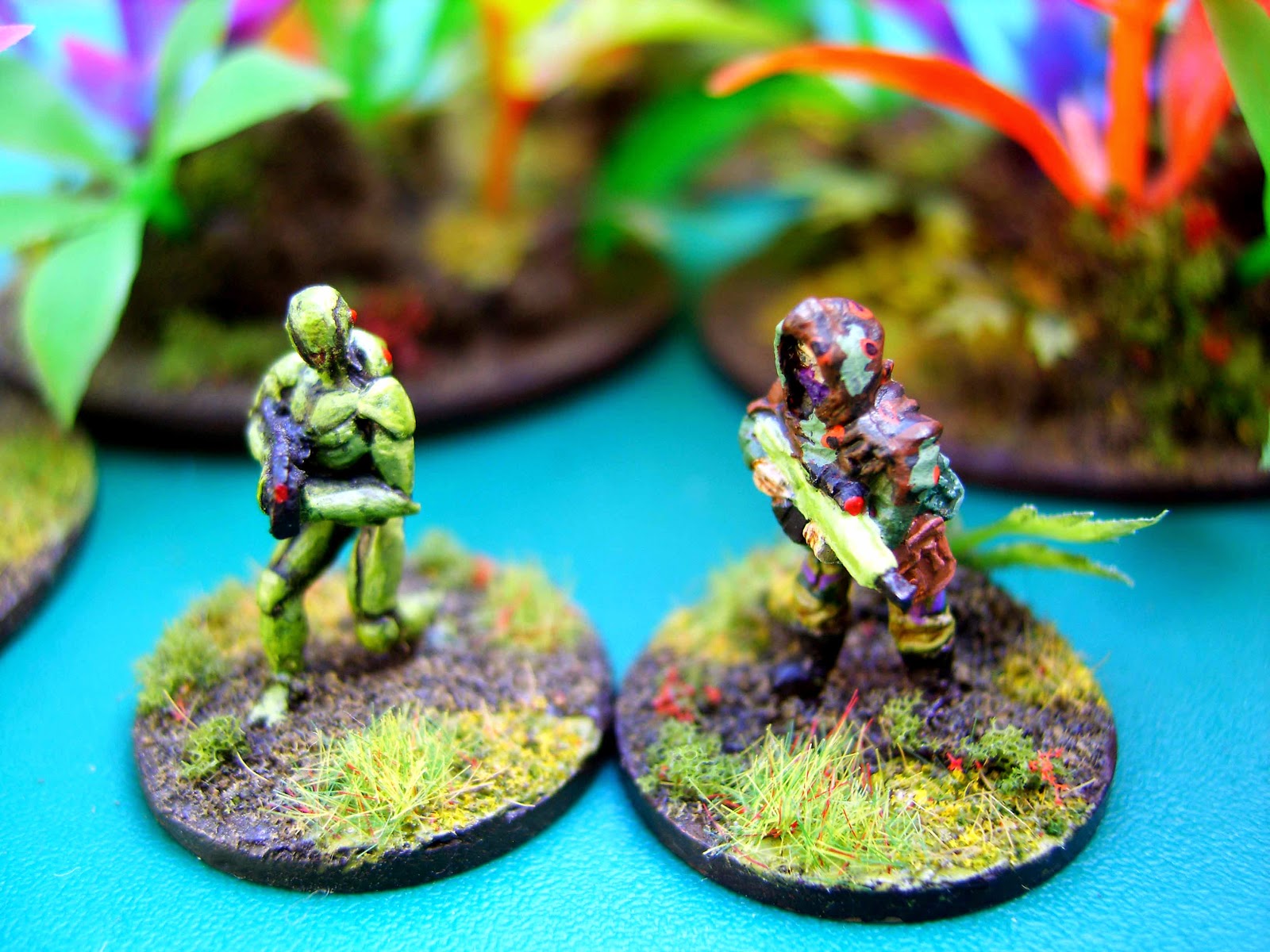 Here is the 1st of my colour-scheme tests for colonial militia fighters in Tomorrow's War.  The figure is a Rebel Minis Sahadeen fighter.  As with all my 15mm scale minis, these are mounted on 1 pence pieces.  The flock is from Gale Force 9, except the static grass, which is Citadel Glade Grass.  The large leaves are snipped from a plastic aquarium plant.  Before I paint up too many of these, I was wondering what people thought of this as an example.  This will be the general palette of colours, but with variations.  The militia fighters will wear a mix-&-match of captured UMC fatigues, drab/foresty civilian clothes, & vivid camo hoods suited to the colony world's flora. 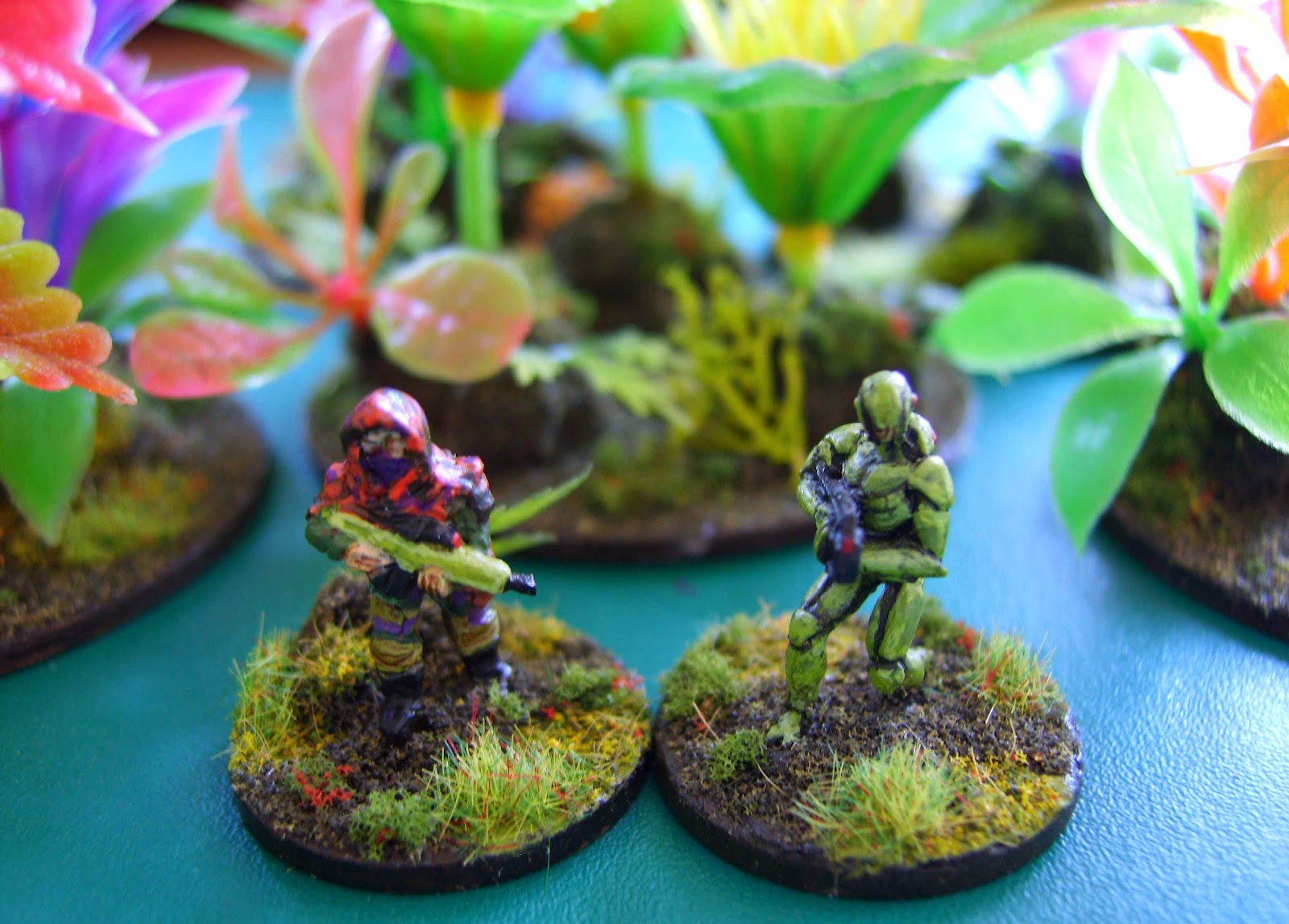 I decided to go with a bright green rifle casing which matches the colonial combat androids that I've already painted up. This is to help tie the colony forces together visually, but also because the weapons used by the militia will be similarly locally-produced using simple templates (in a '3D-printing' style).  The colonial weapons & droids will generally be lightweight, easy to produce & maintain; but outclassed by the rugged, tried-&-tested military tech of the UMC invaders.  All colour-scheme thoughts, opinions & suggestions welcome. 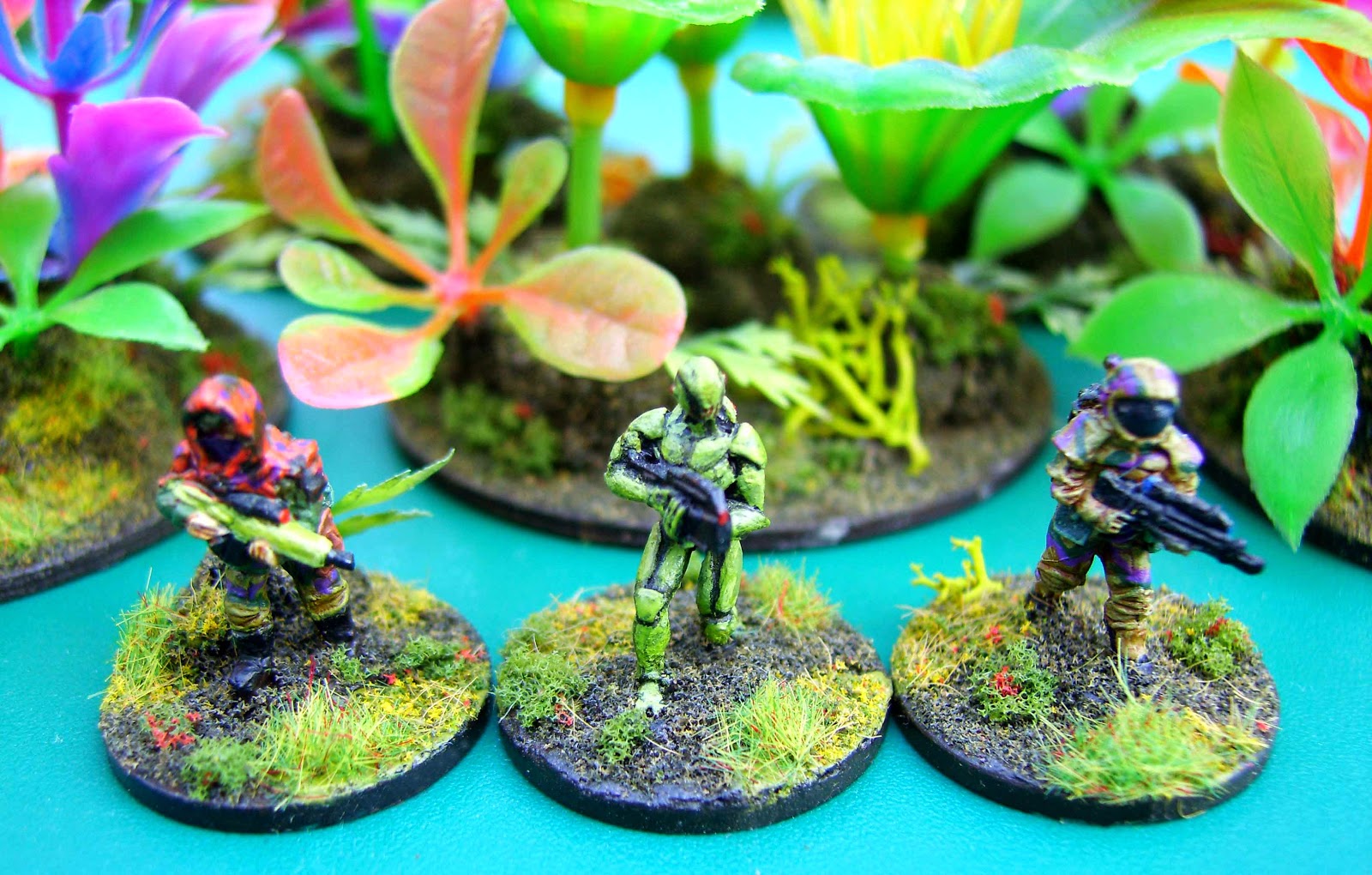 This week I finished my Unified Marine Corps VTOL flyer, for Tomorrow's War.  The model is the 15mm scale Sabre Class Dropship, which is a really nice sculpt.  After initially painting it dark green (Black Hawk style), I consulted my gaming comrades Tim & Dom, who advised that I stick with my established UMC camo scheme, but with an old-school sky-tone underside (slightly turquoise to suit the extraterrestrial setting).  The one thing I may add to it are small feet on the legs of the troop pod, because currently the nose of the VTOL is lifted by the underside of the chin gun when 'landed'.  The optional flying base is a GW Battlefleet Gothic battleship one, with the tallest stem. 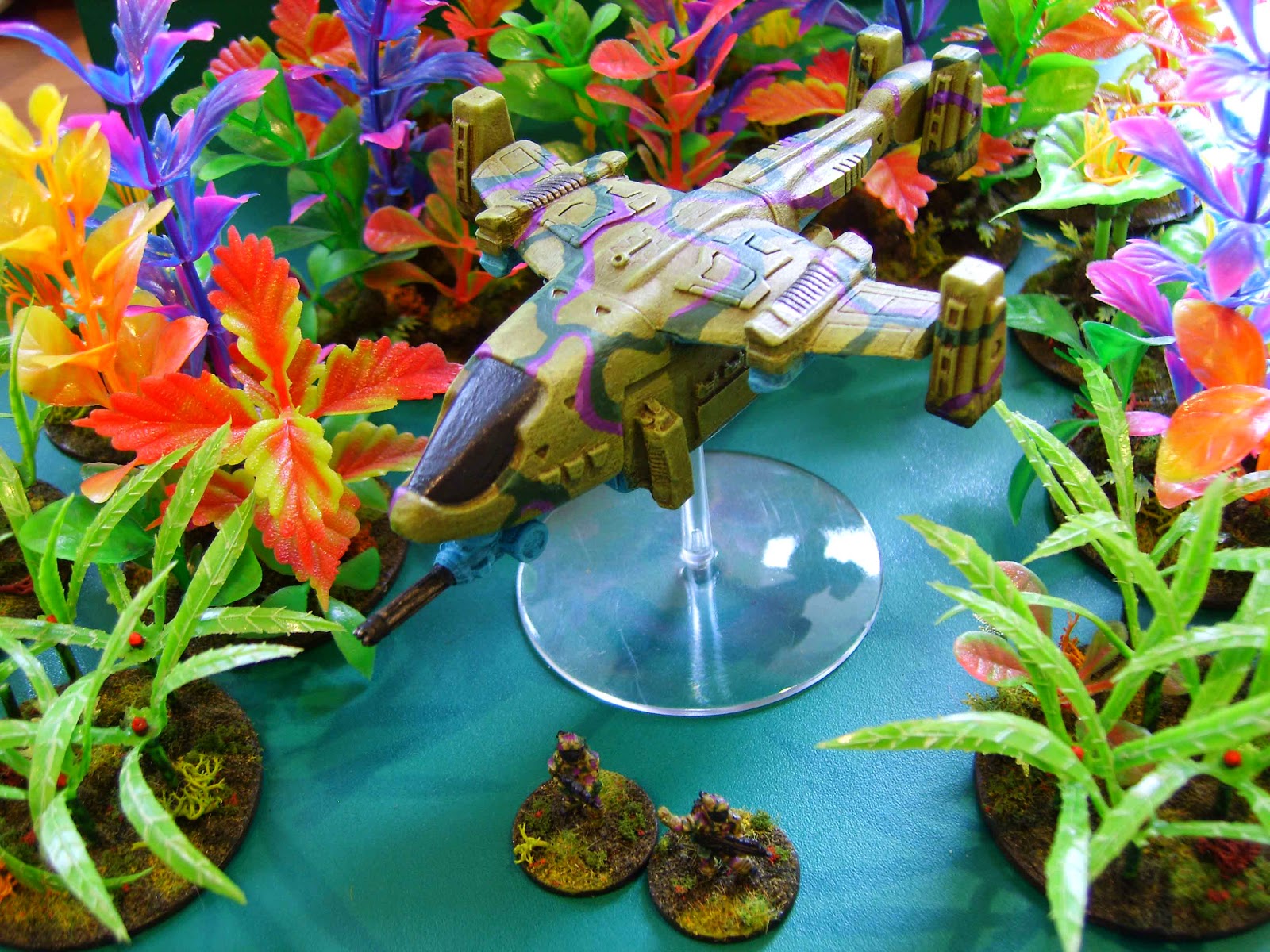 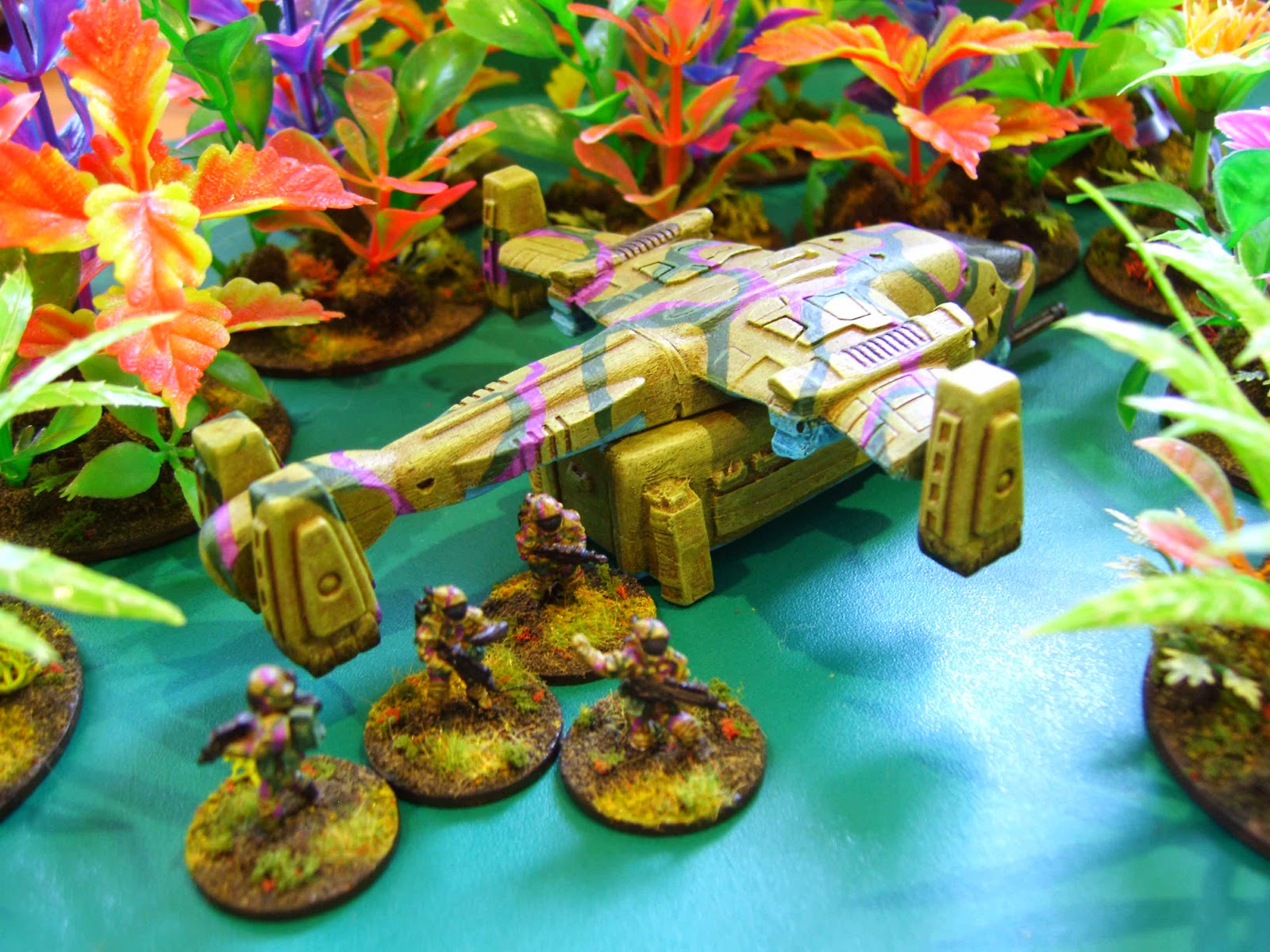 I'm still considering naming choices for this flyer, but I'd like 'Buzzard' to feature in the designation.  I want to accommodate the possibility of buying the dual AT cannon variant in the naming convention...  Getting a 2nd model will also allow me to try alternate positioning for the direct thrust engines.  I went with the takeoff/landing vertical positioning for this VTOL, as it is the transport variant. 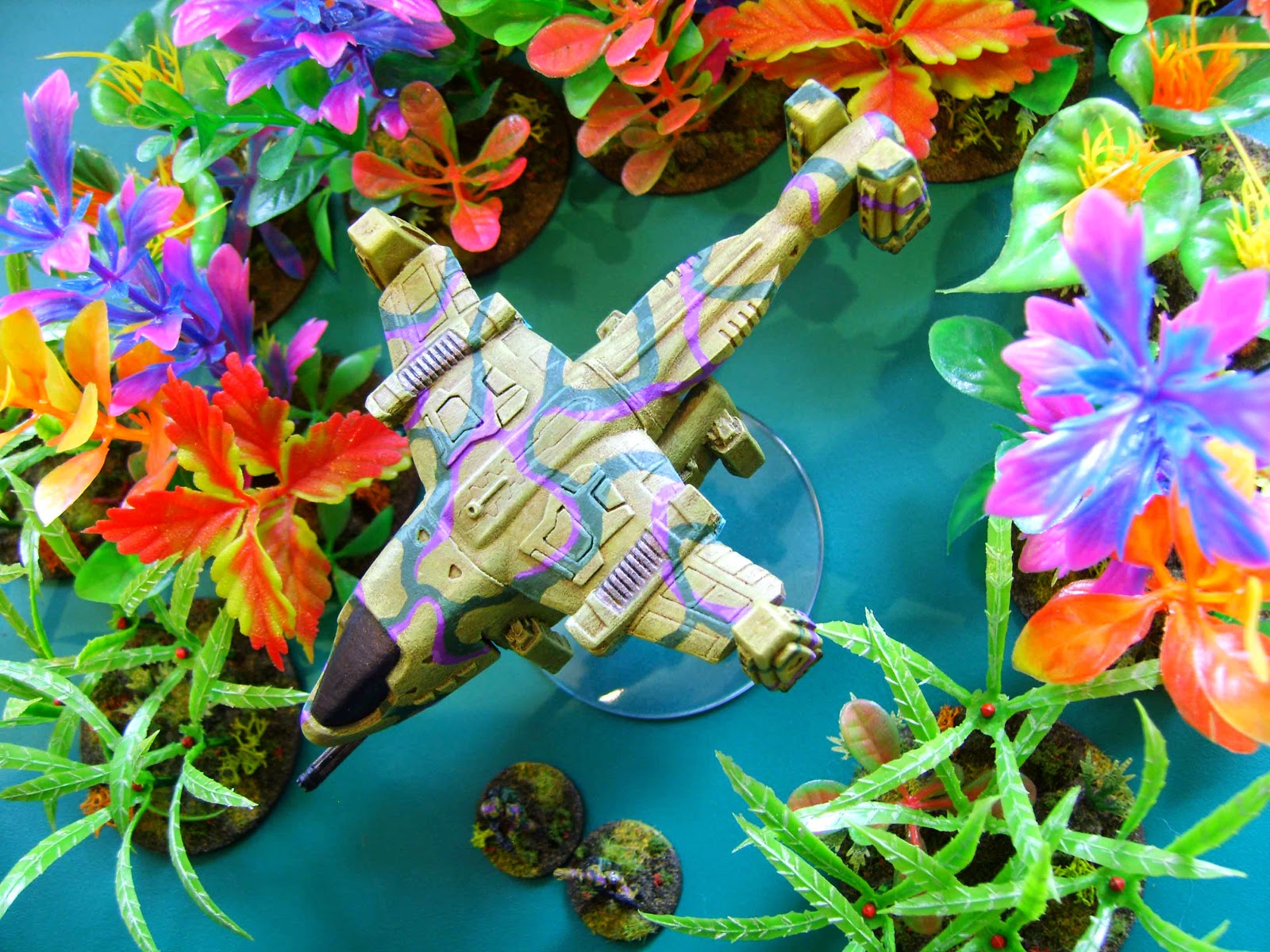 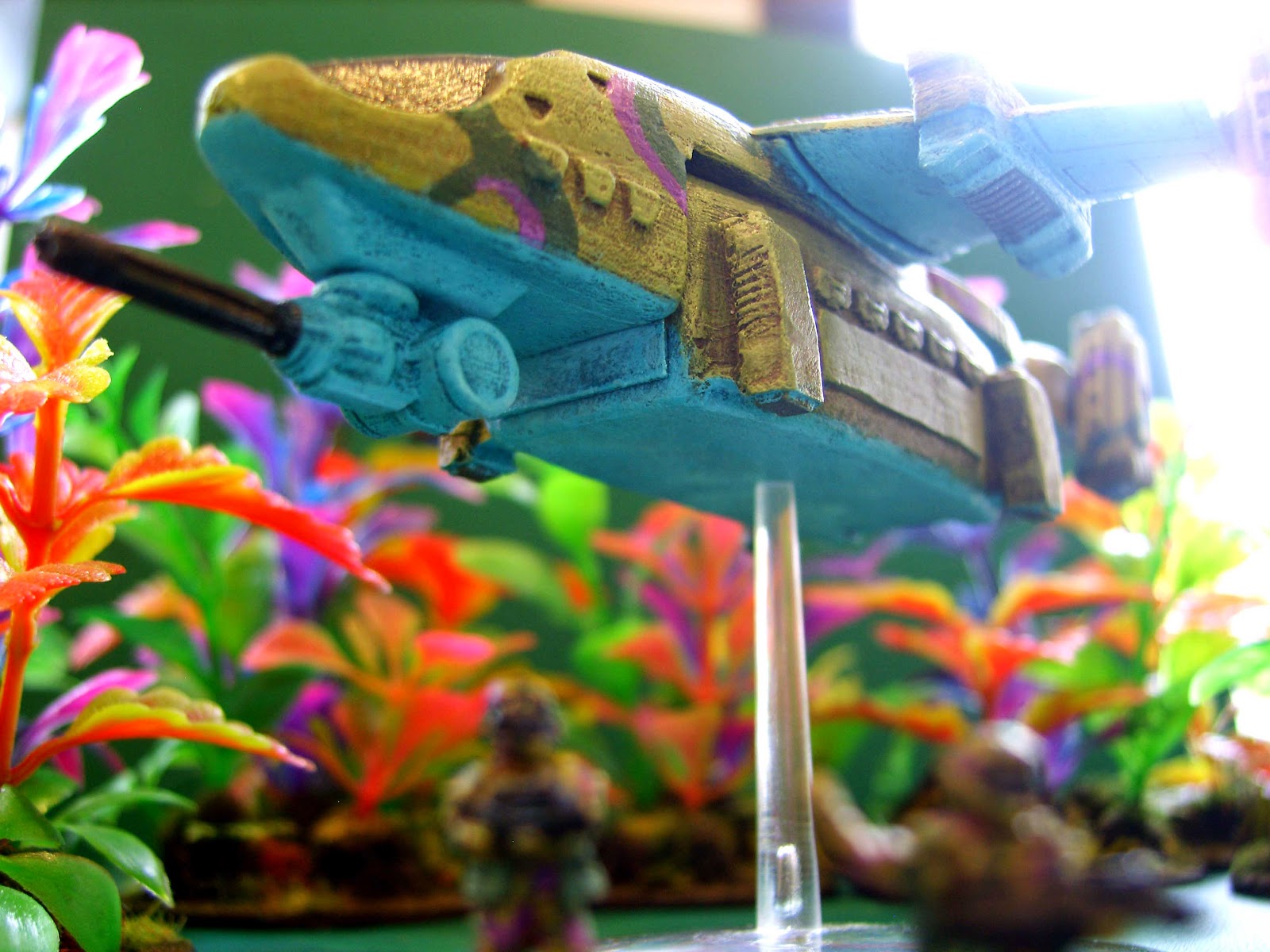 The Tomorrow's War stats that I have in mind for this VTOL are: