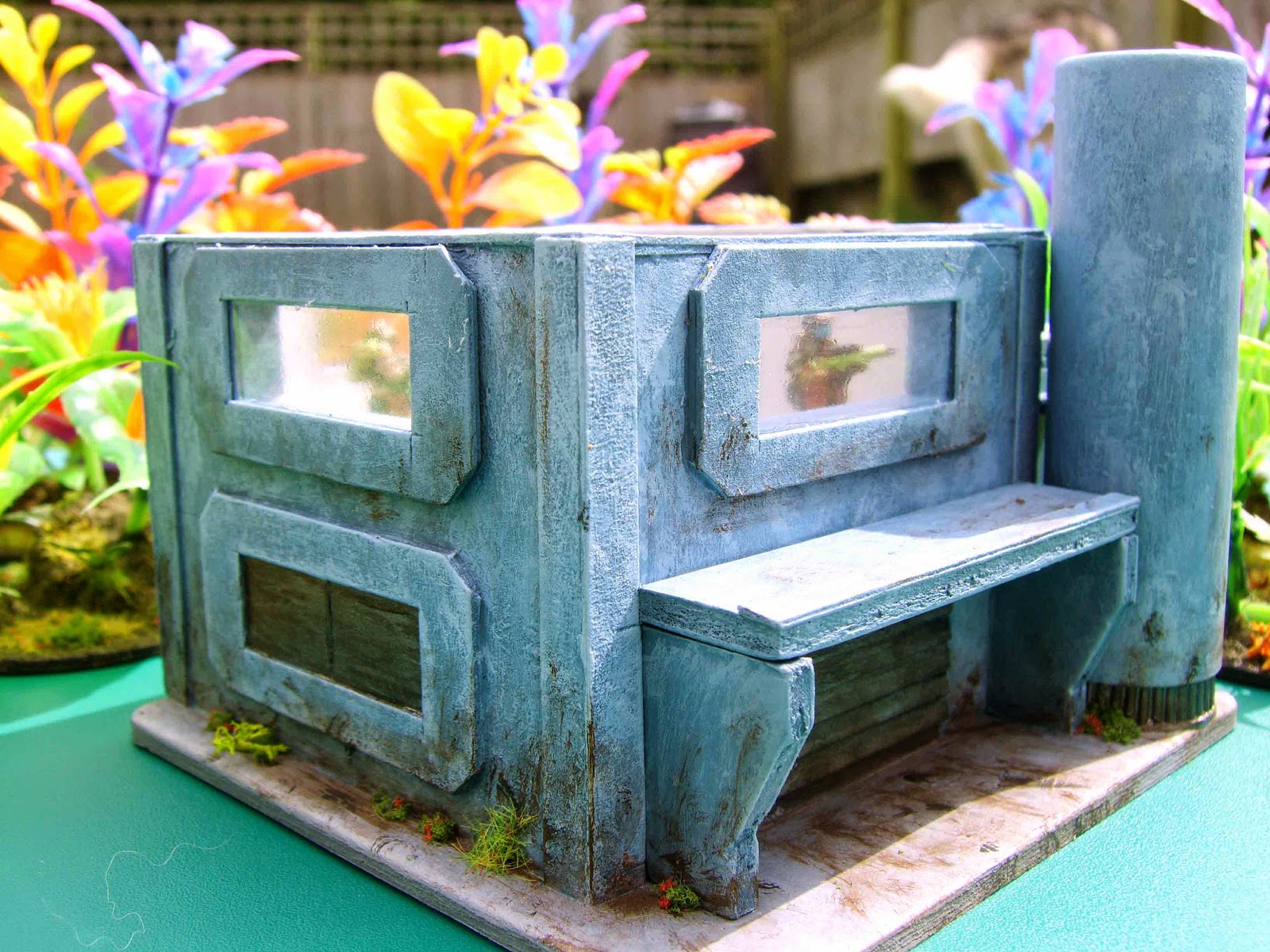 Over the past few days I've scratchbuilt my first building for 15mm-scale Tomorrow's War.  This represents a pre-fab structure commonly used on the colony world of Gondwana as the starting point for frontier settlements.  From an initial cluster of structures like this, new buildings utilising local materials would be added as the population of a town grows.  I imagine the initial pre-fab structures such as this would remain as the heart of the community, as administration, comms, power, & water distribution, Directorate police stations etc.  This one is probably the local grav-vehicle repair bay.  I will be making a selection of variations on this design, some suitable for joining into larger building setups. 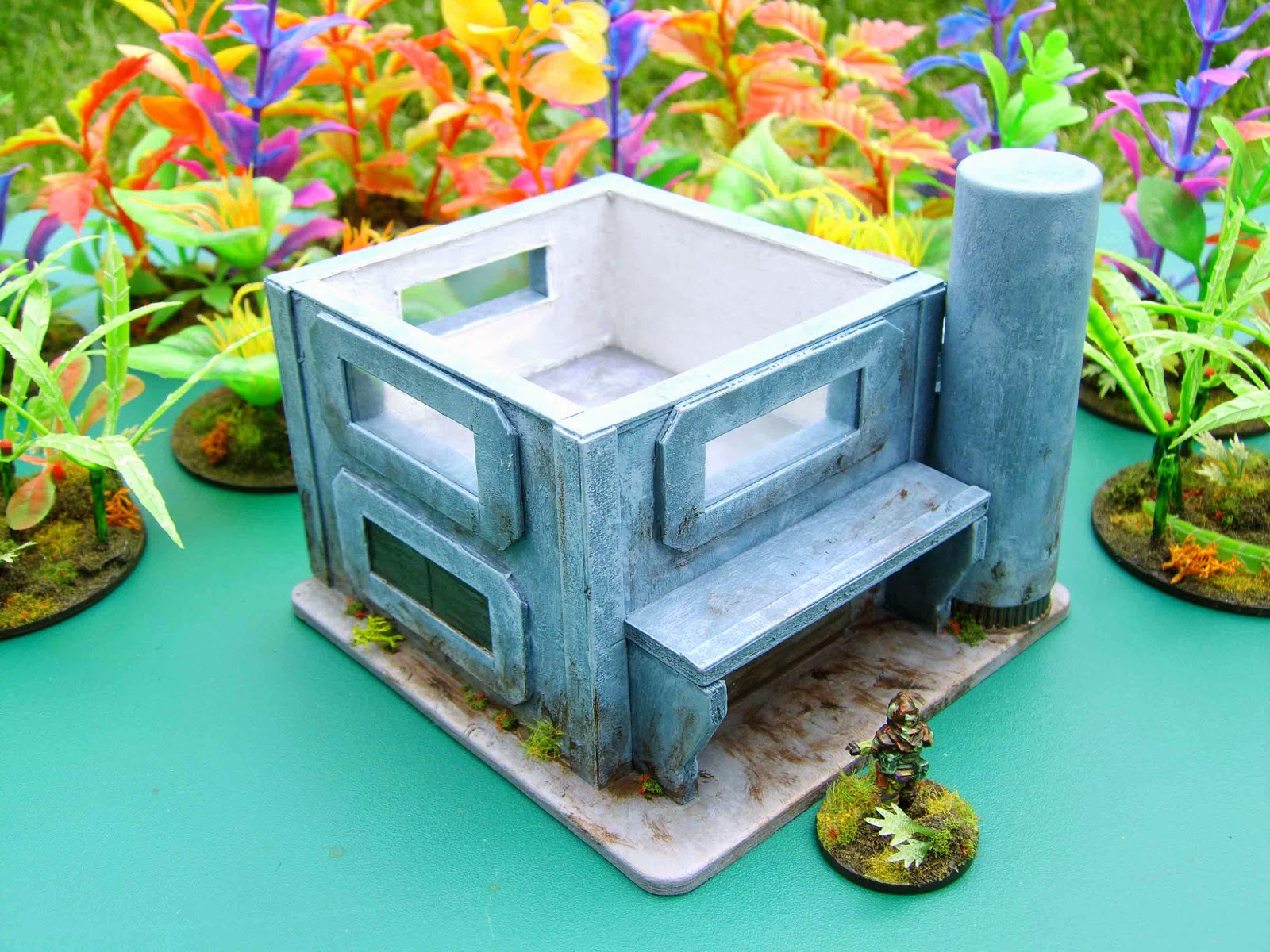 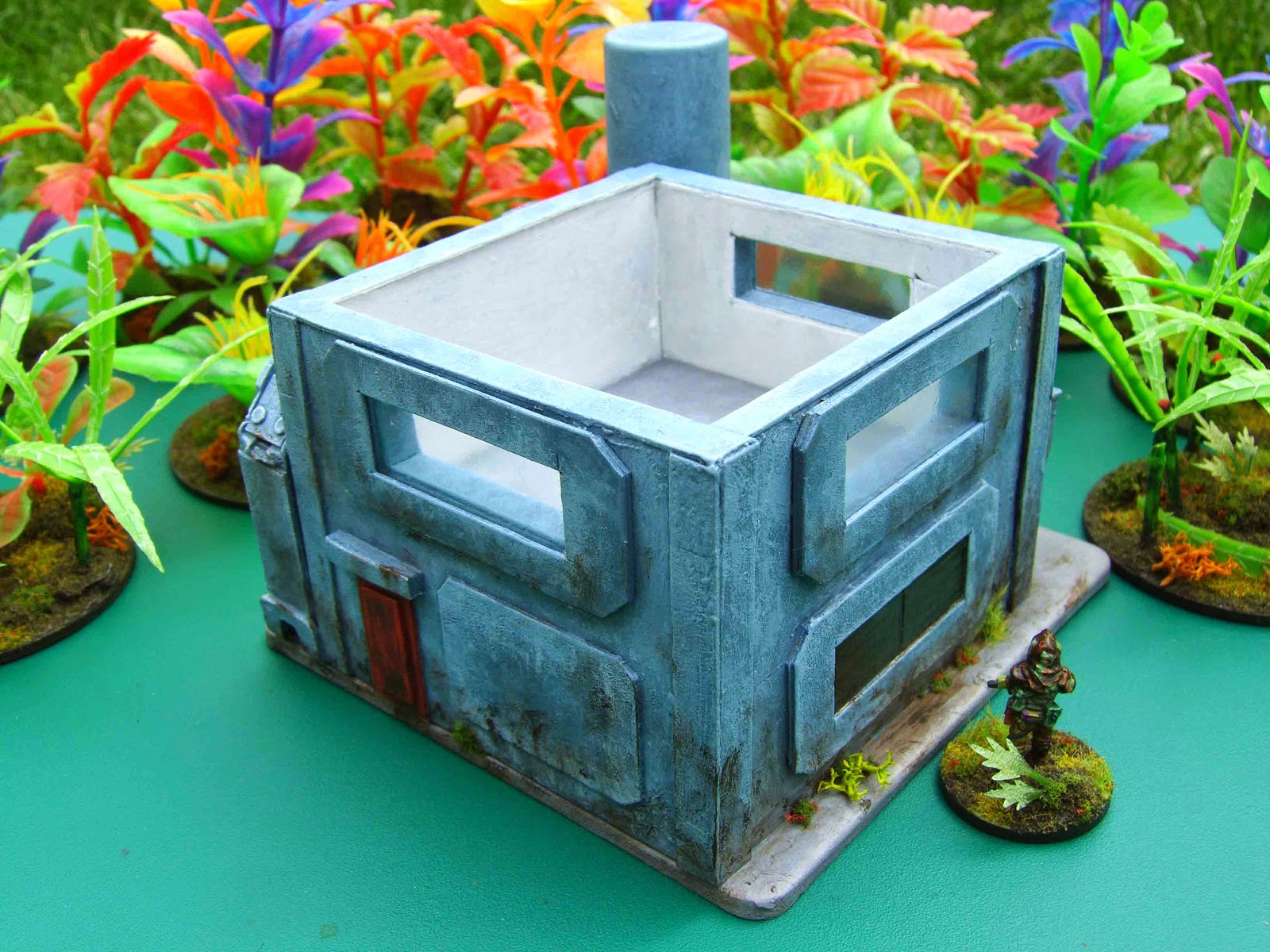 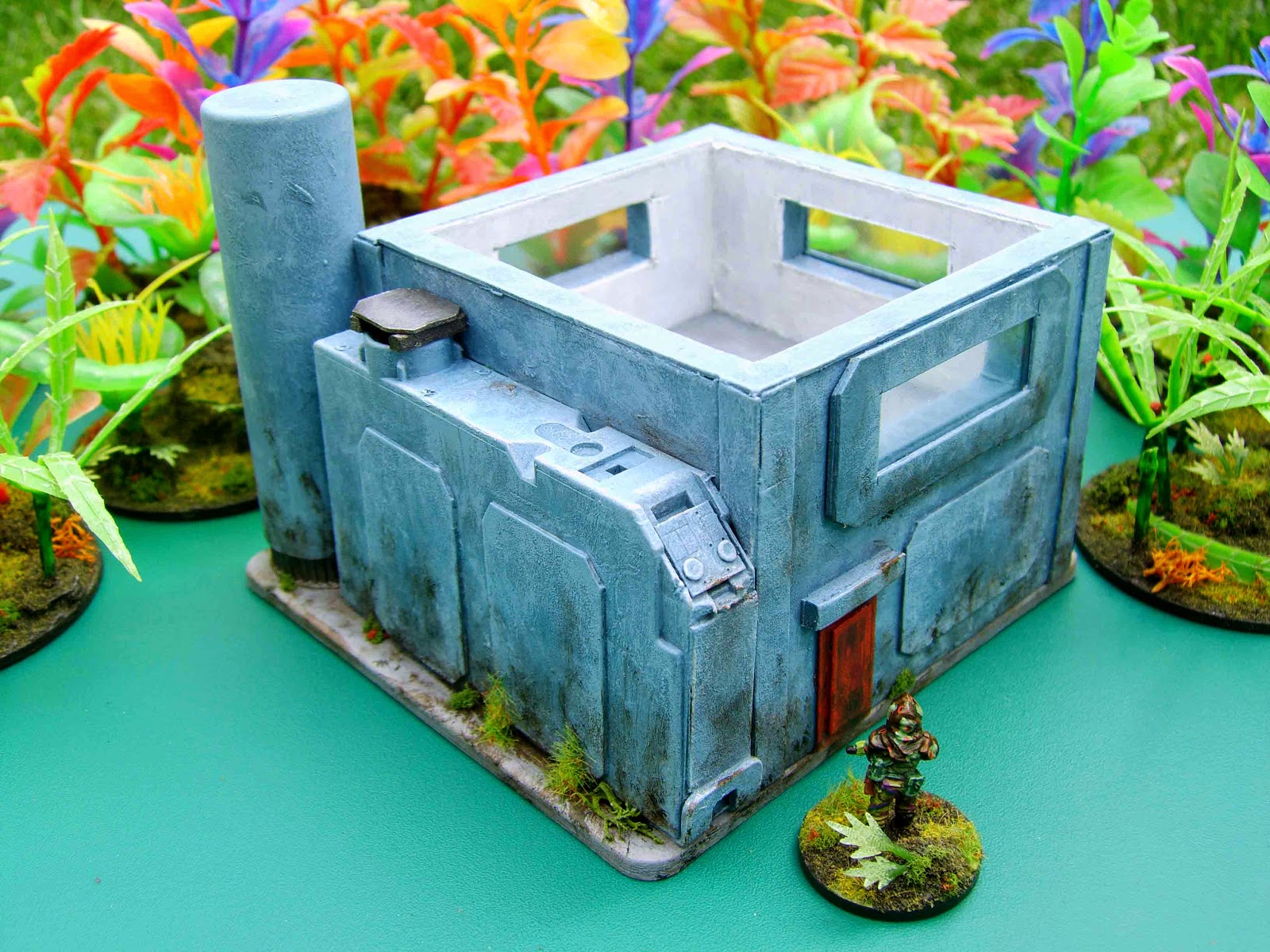 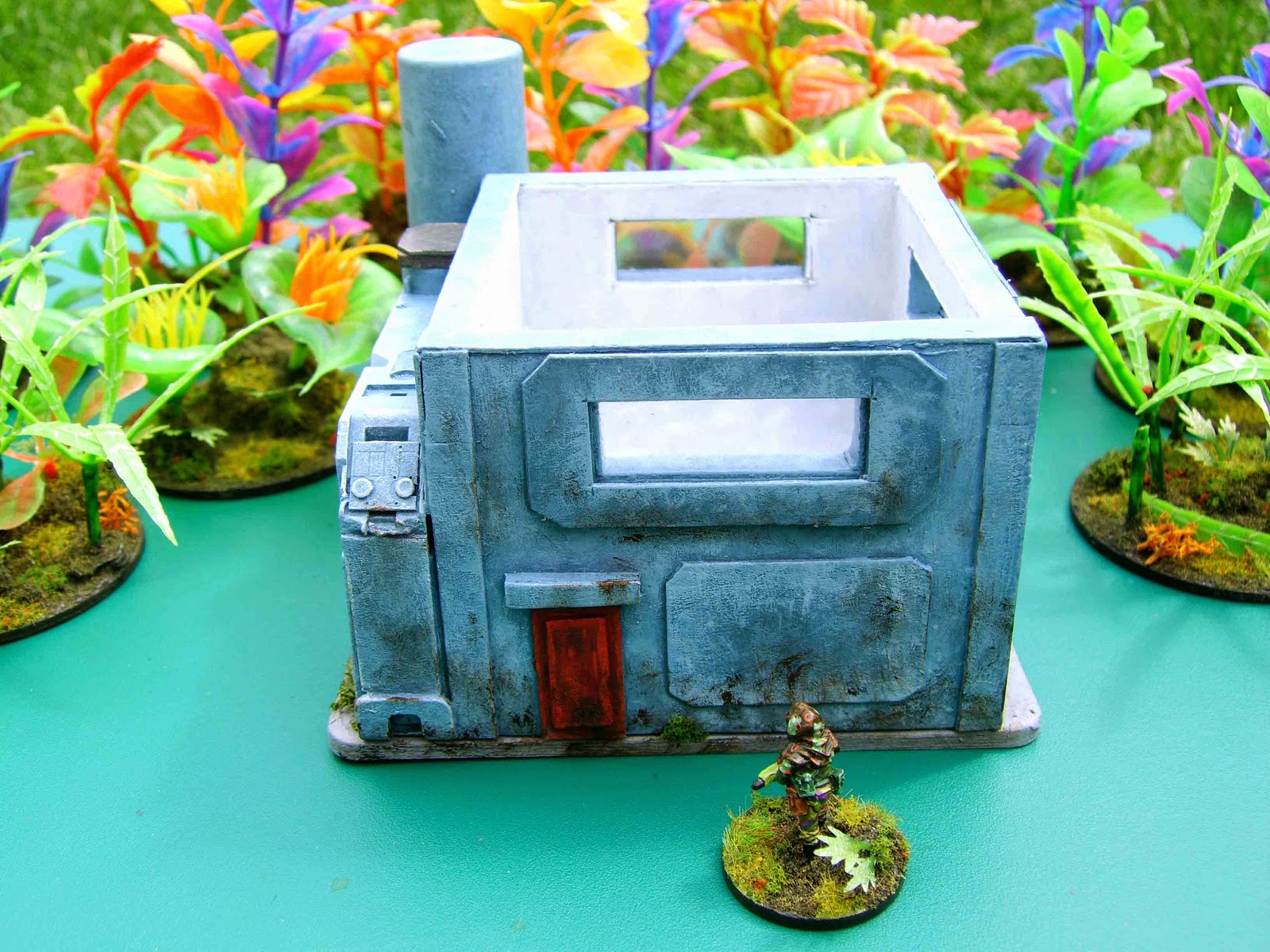 The base is a promotional drinks coaster I got through the post (I've saved-up quite a few).  I've been wanting to use these as ready-made tesselating bases for a while.  Need to get some old dinner plate mats to use as bases for compounds & larger buildings next.  The walls are 5mm foamboard, with breakfast cereal box card detail, whilst the shelter over the garage door is 3mm foamboard.  The generator is an empty printer cartridge, & the water purification tank is a throat lozenge tube. 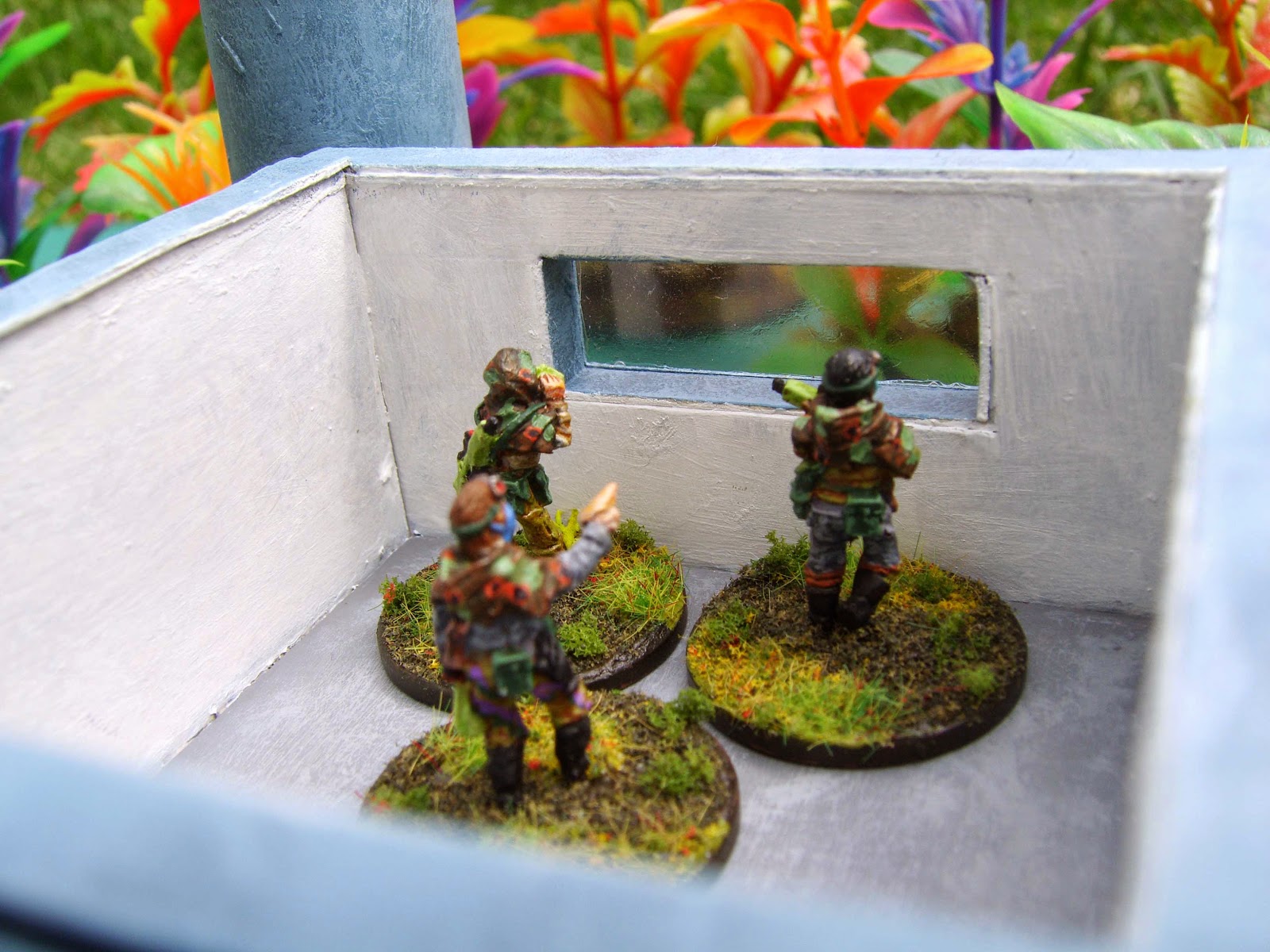 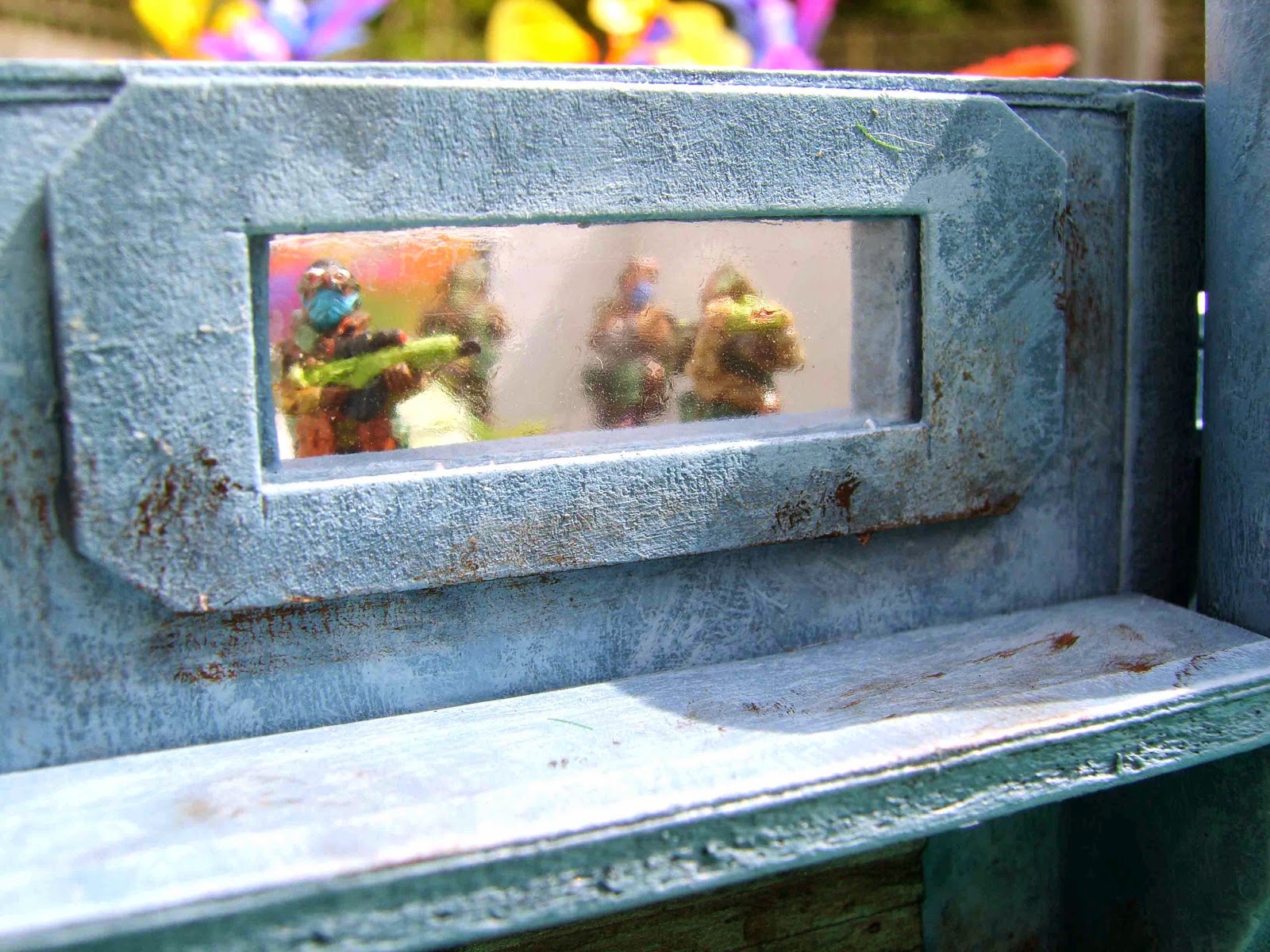 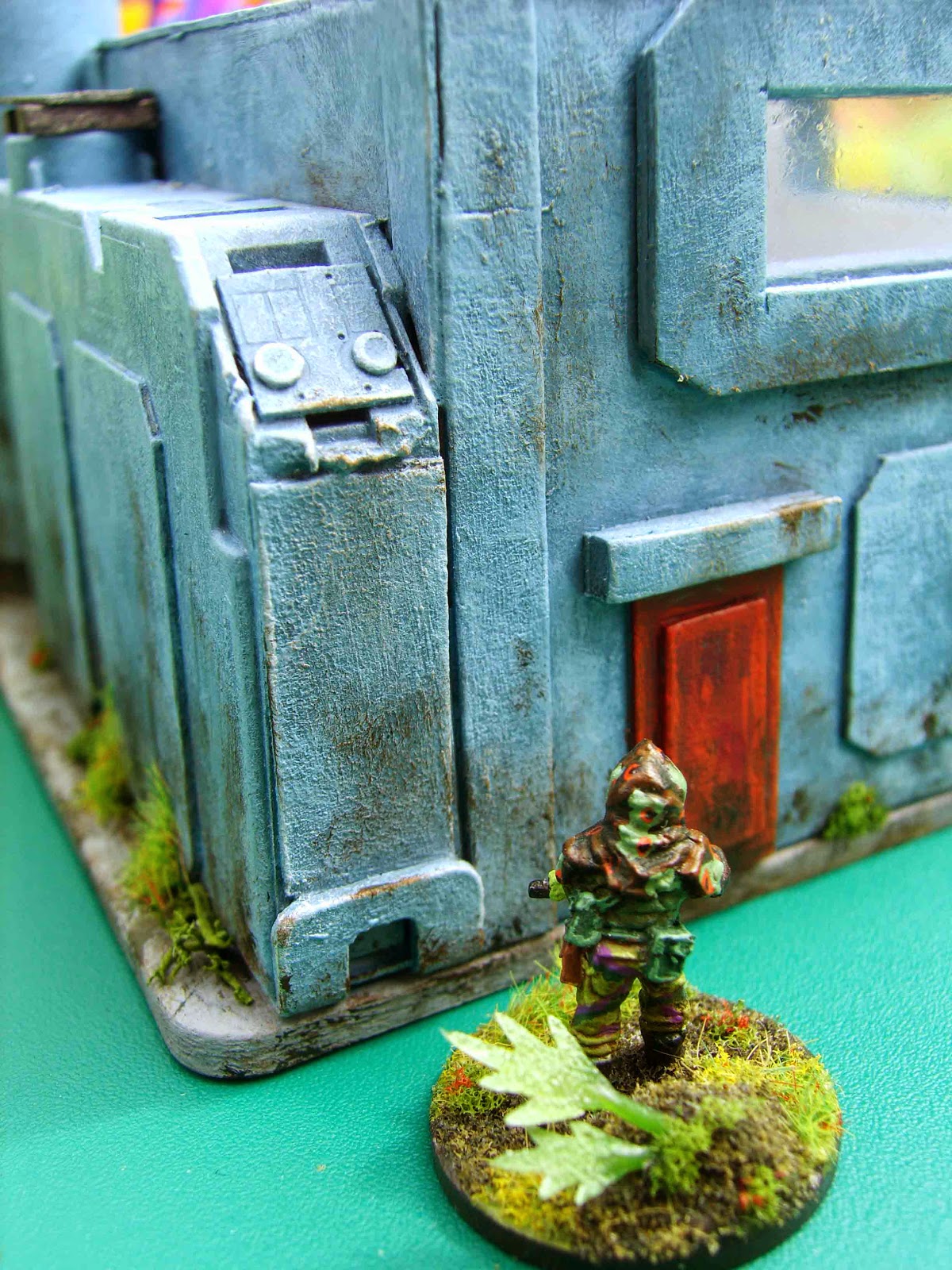 Another thing I've been wanting to try is 'actual glass' windows using all the transparent plastic that I've been saving from packaging - I've finally done it here, & I'm very pleased with the results!  The 'glass' sheets are sandwiched between the two halves of the window frames (which I painted prior to adding the 'glass').  I've depicted one window with it's shutters closed.  I need to finish this building off with a removable roof.  I'm thinking maybe a half-cylinder shape, but it'd be nice to fit some solar panels in somehow.  Any suggestions welcome!  Below are some WIP views before I started painting this building:

Next up, two UN aid workers for 15mm-scale Force on Force.  I need to paint another four of these for Day of the Rangers, as there are two scenarios from the sourcebook in which US forces must protect UN workers in Mogadishu.  I picture the bloke as a European or US national working on the front line of crisis relief.  The rest will be native African workers. 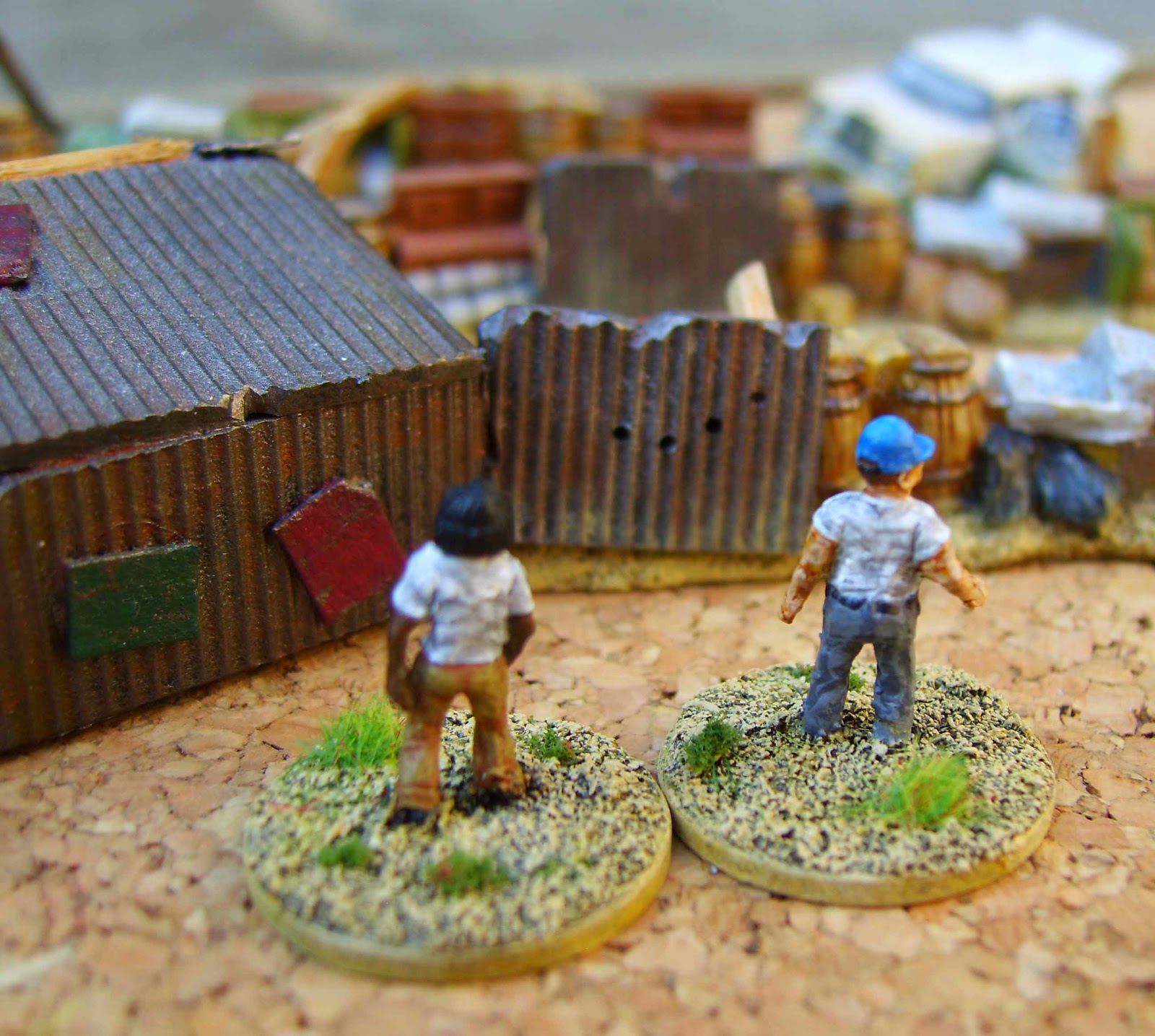 The figures are from the Rebel Minis 'Modern Civilians' pack.  As with all my single-based 15mm figures, these are mounted on 1p pieces.

This weekend I've painted-up my first batch of Separatist Militia for 15mm-scale Tomorrow's War.  My friend Tim & I have been working on a fairly detailed background for the setting - a colony world called Gondwana being contested by increasingly android/drone-based Separatist forces, & a Unified Marine Corps expeditionary force from the Sol System.

First up are some group shots of the militia so far.  Compared to the lime-green of the 'Ashigaru' combat androids & the camo suits of the UMC that I've painted previously, these militia are more time-consuming, as I've gone for a mix of civilian & military clothes, but tried to tie their overall look together with matching camo-hoods, & equipment that matches the colour of the Separatist 'droids. 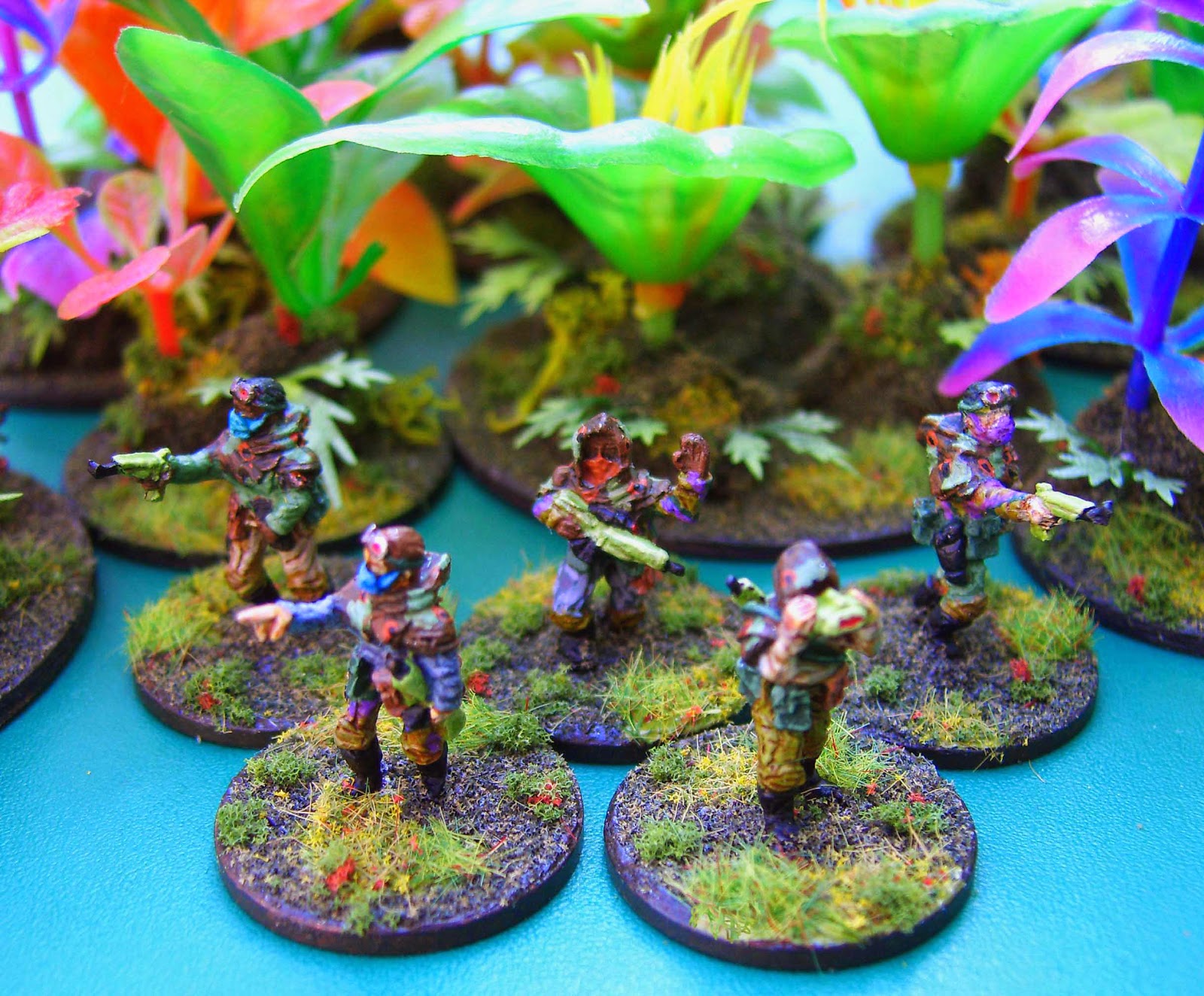 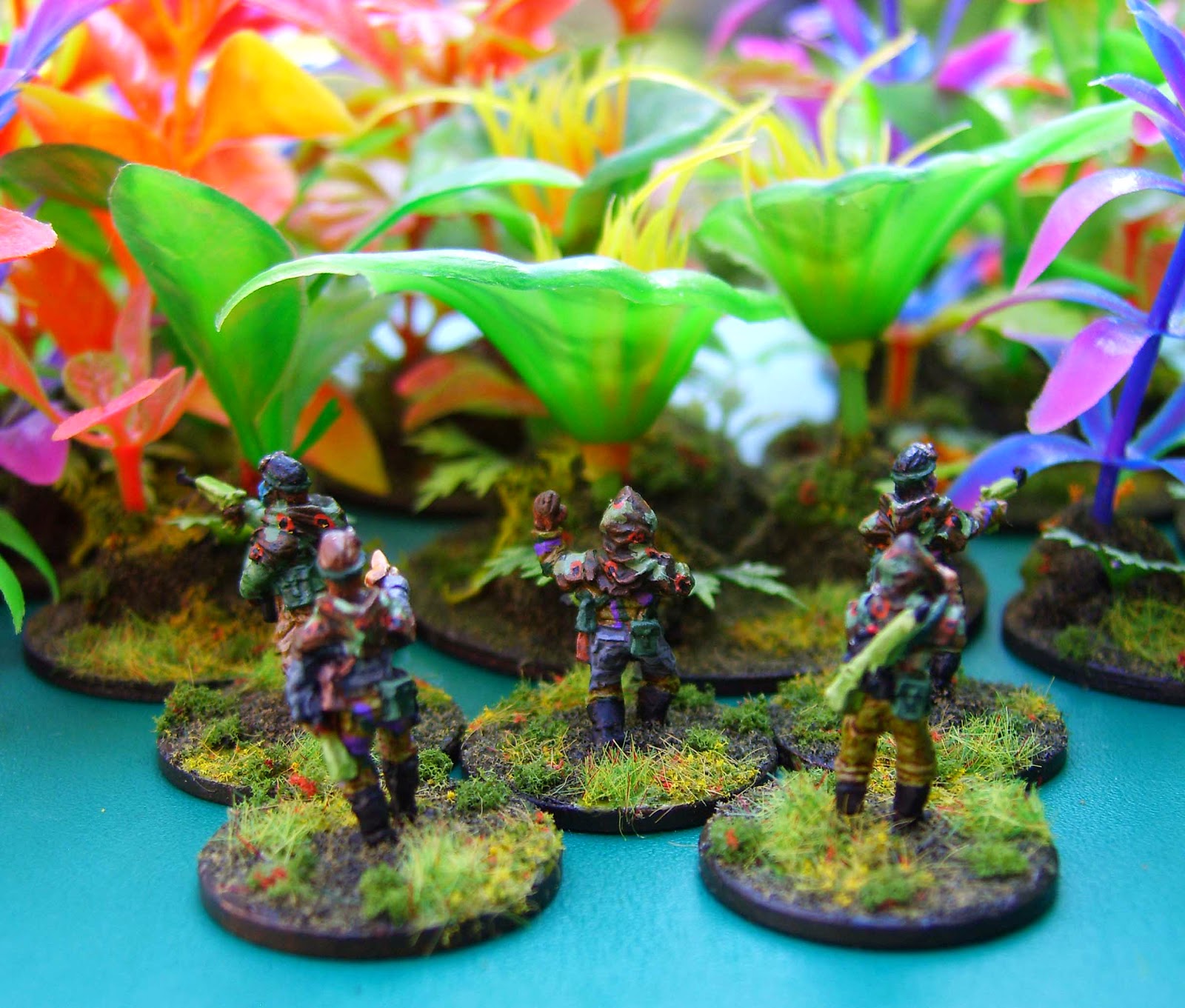 I've used the excellent & varied Rebel Minis Sahadeen for my Separatist Militia.  Above are some militia leaders.  Irregular Leaders are very important in Tomorrow's War, as without them, Irregulars can struggle to react effectively to the Regular force. 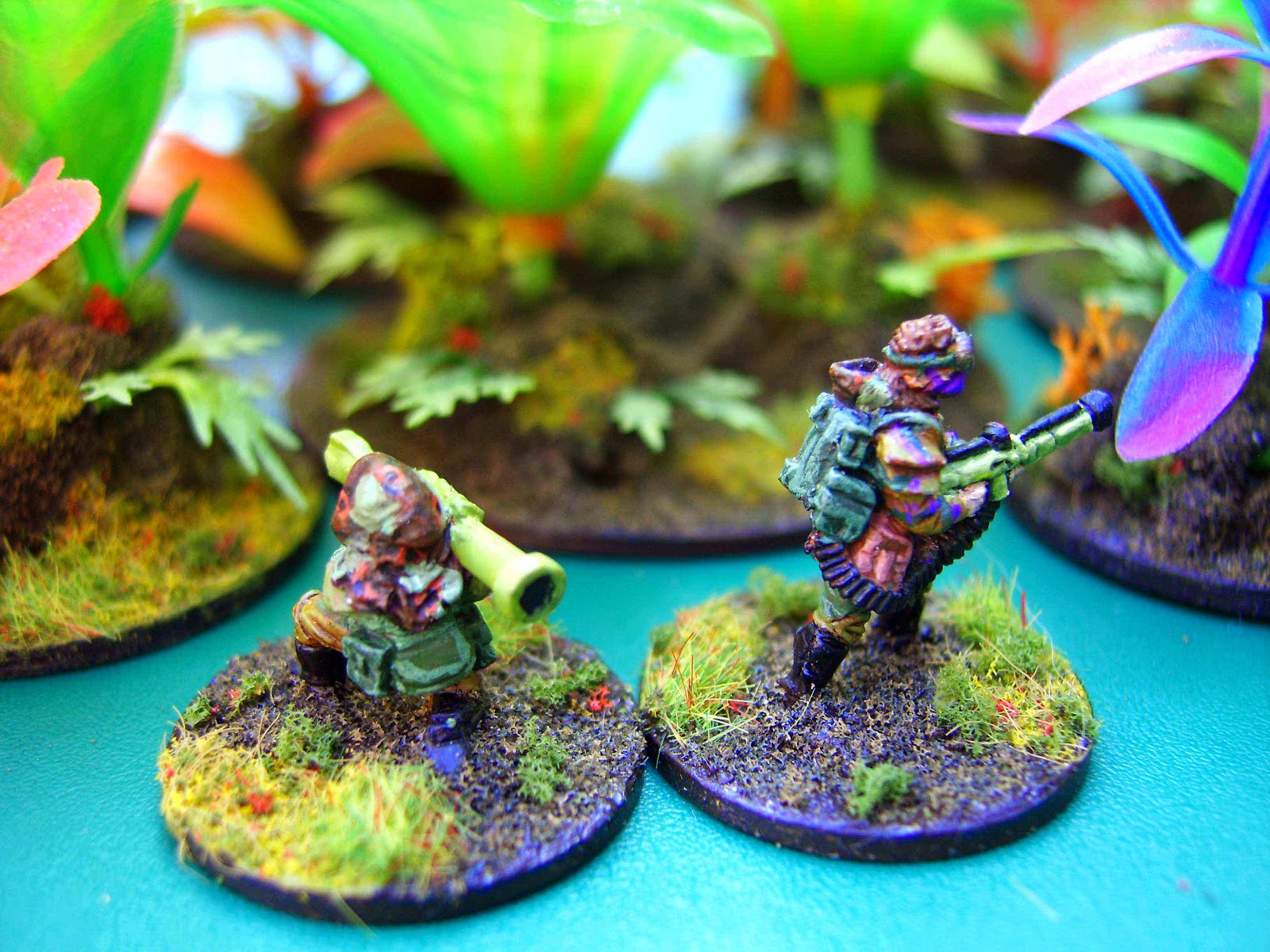 Lastly, two support weapons for the militia - a GPMG belt-fed from a backpack, & an ATGM.  The militia are armed with locally-made weaponry that is less-advanced than those of the combat-experienced Sol forces, but easily manufactured across Gondwana by local workshops using templates. 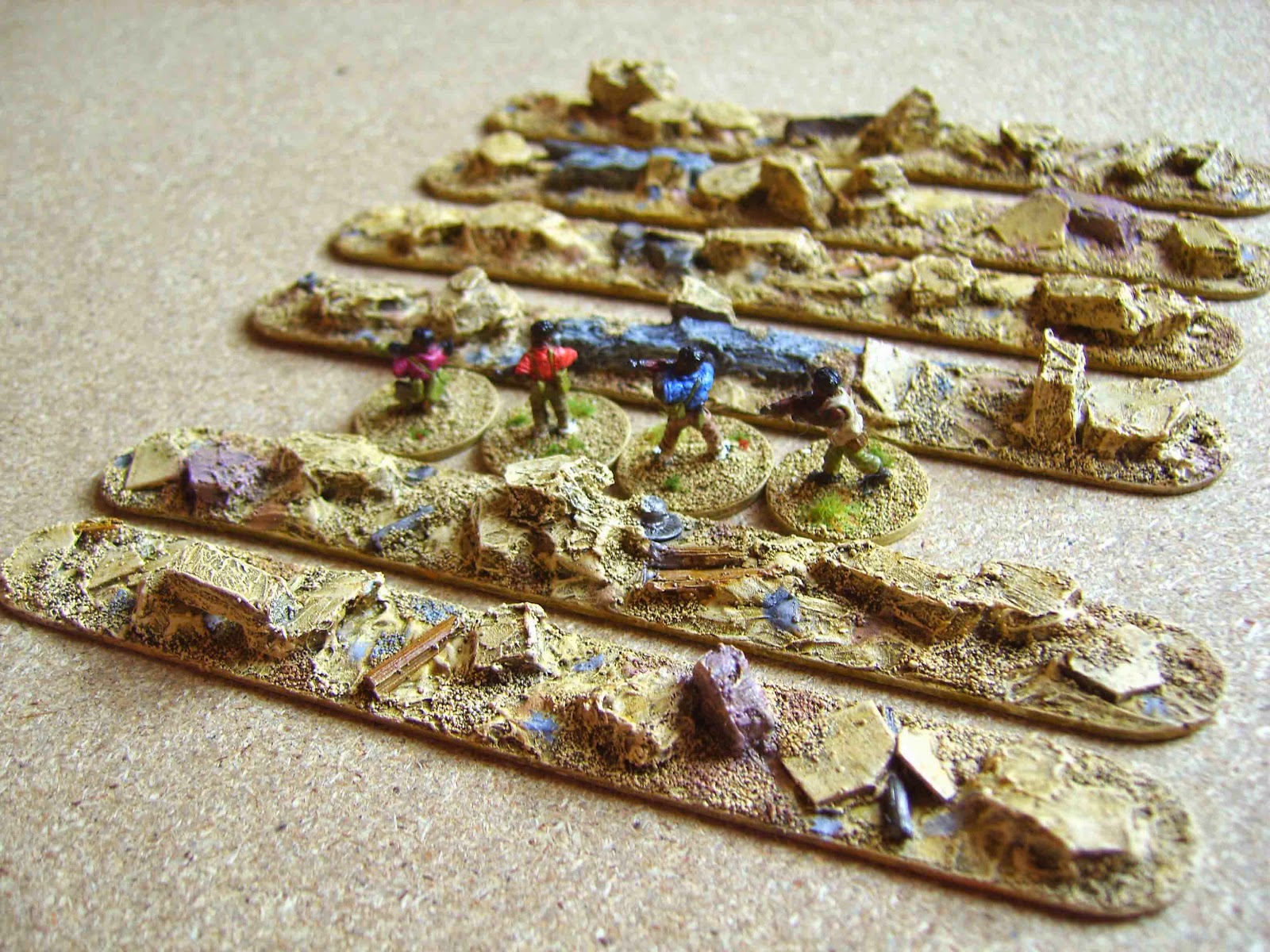 Some scenarios in Day of the Rangers call for certain areas to be 'Rubble & Trash Strewn', which slows the movement of UN/US forces.  I thought it'd be neat to have some scenic pieces to mark these obstructed streets (either placed down the centre or at the sides of the roads).  So this week I put together six Rubble & Trash markers, using large lolly sticks as bases, & tiny chunks of 5mm foamboard, chips of wood, sections of cocktail stick, & a broken button-popper, textured & bulked using paint thickener (essentially pre-mixed all-purpose filler), & with the usual sand ground effect: 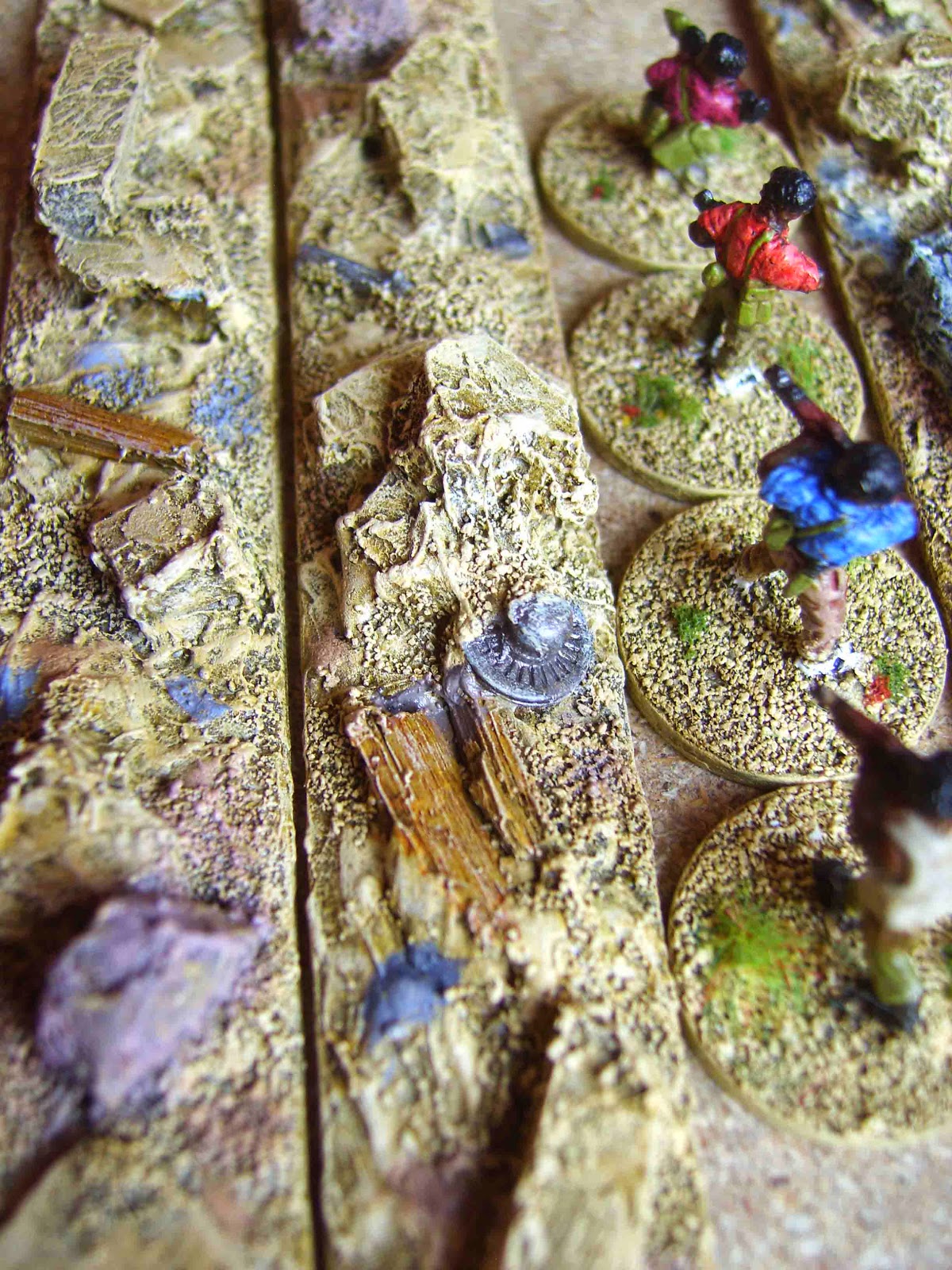 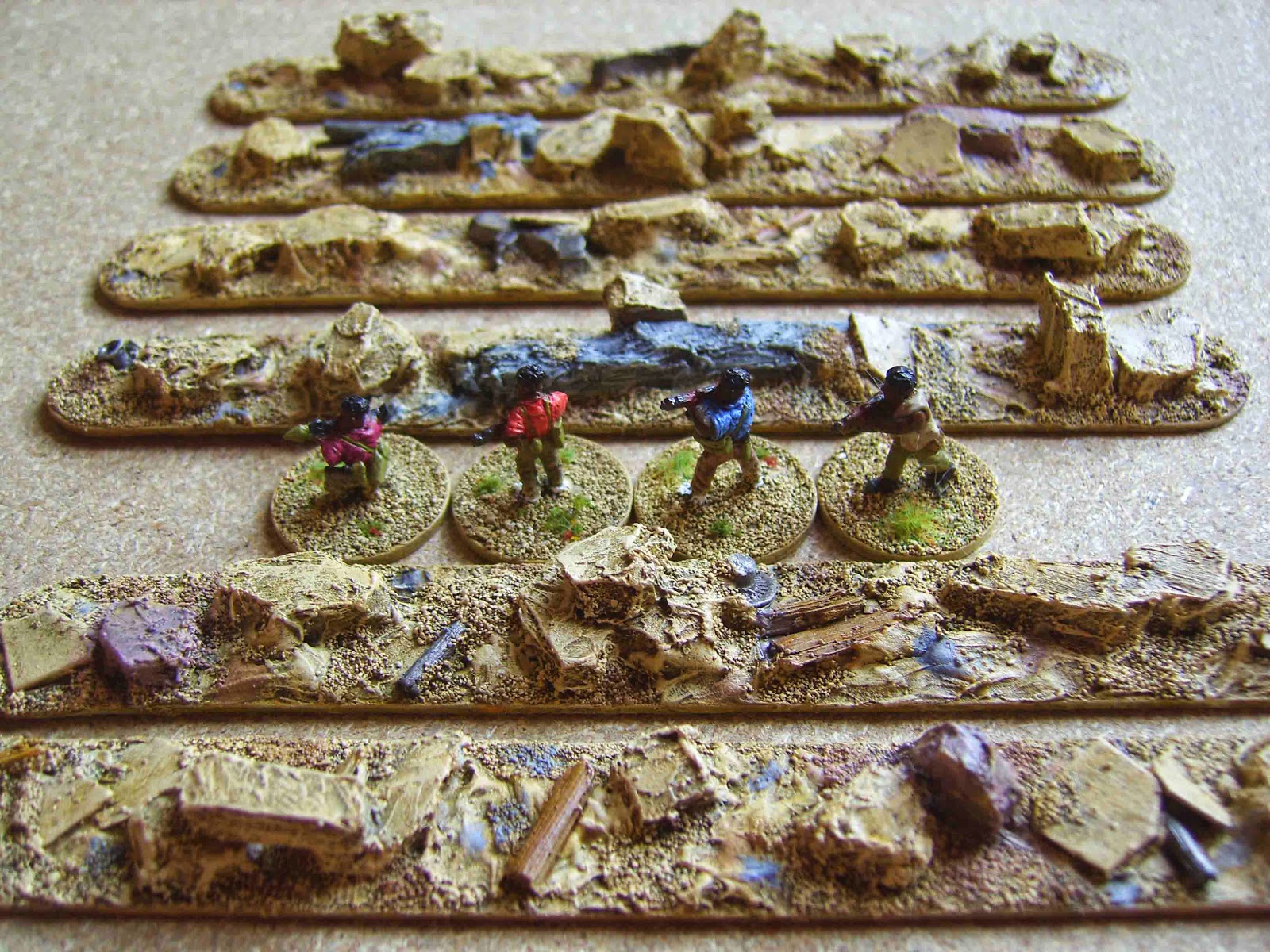 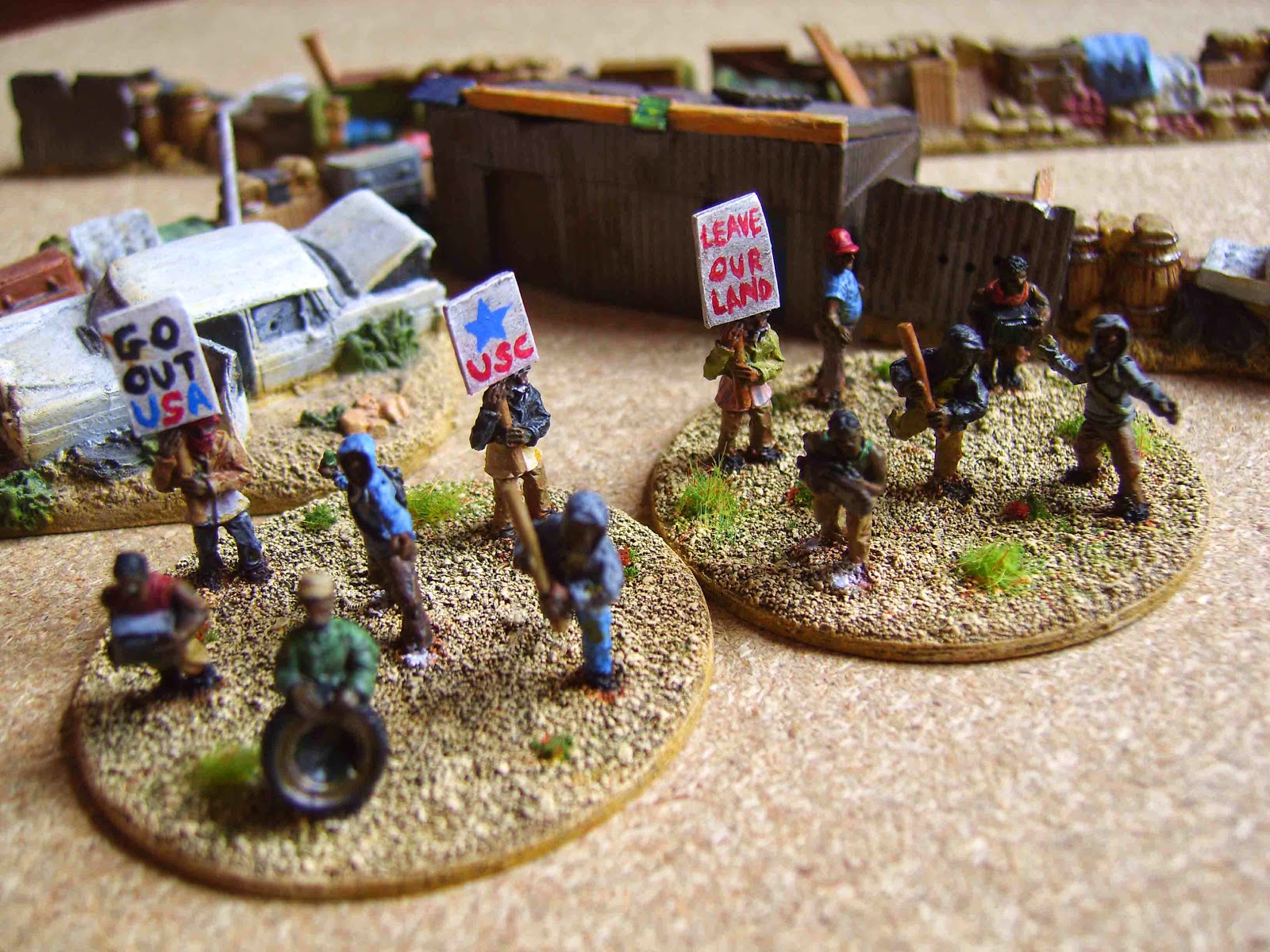 This weekend I put together a hostile mob for Force on Force (15mm scale).  As mentioned previously, I've gone with a two-base approach to represent mobs.  This allows for 'column' placement in streets & alleyways, as well as 'broad' placement in open areas.  Also the size of the mob can be halved if it suffers significant casualties in the crossfire.  In Force on Force Hostile Mobs aren't an actual physical threat to regular forces, but they can raise the Stress Level of units using Taunts.  This degrades the combat effectiveness of regulars.

I looked at photos & footage of the sort of messages daubed on placards & banners in African & Middle East protests, & noticed that often the phrases used can read a little odd to native English speakers - hence the bloke holding the "GO OUT USA" sign.  For variety I trimmed the placard of the "USC" (United Somali Congress)-supporting man.  The guys hauling TVs & a tyre are busy building a barricade.

The miniatures are a mix of Rebel Minis Modern Rioters, & Peter Pig AK 47 Republic Looters.  The bloke in the red baseball cap is a Rebel Minis Modern Civilian.  He's a bit on the fat side for 1990s Somalia, but I figure he's a USC agitator well-fed on stolen UN food aid.  The bases are laser-cut ply from Fenris Games.
Posted by Pawn Cocktail at 15:14 2 comments: 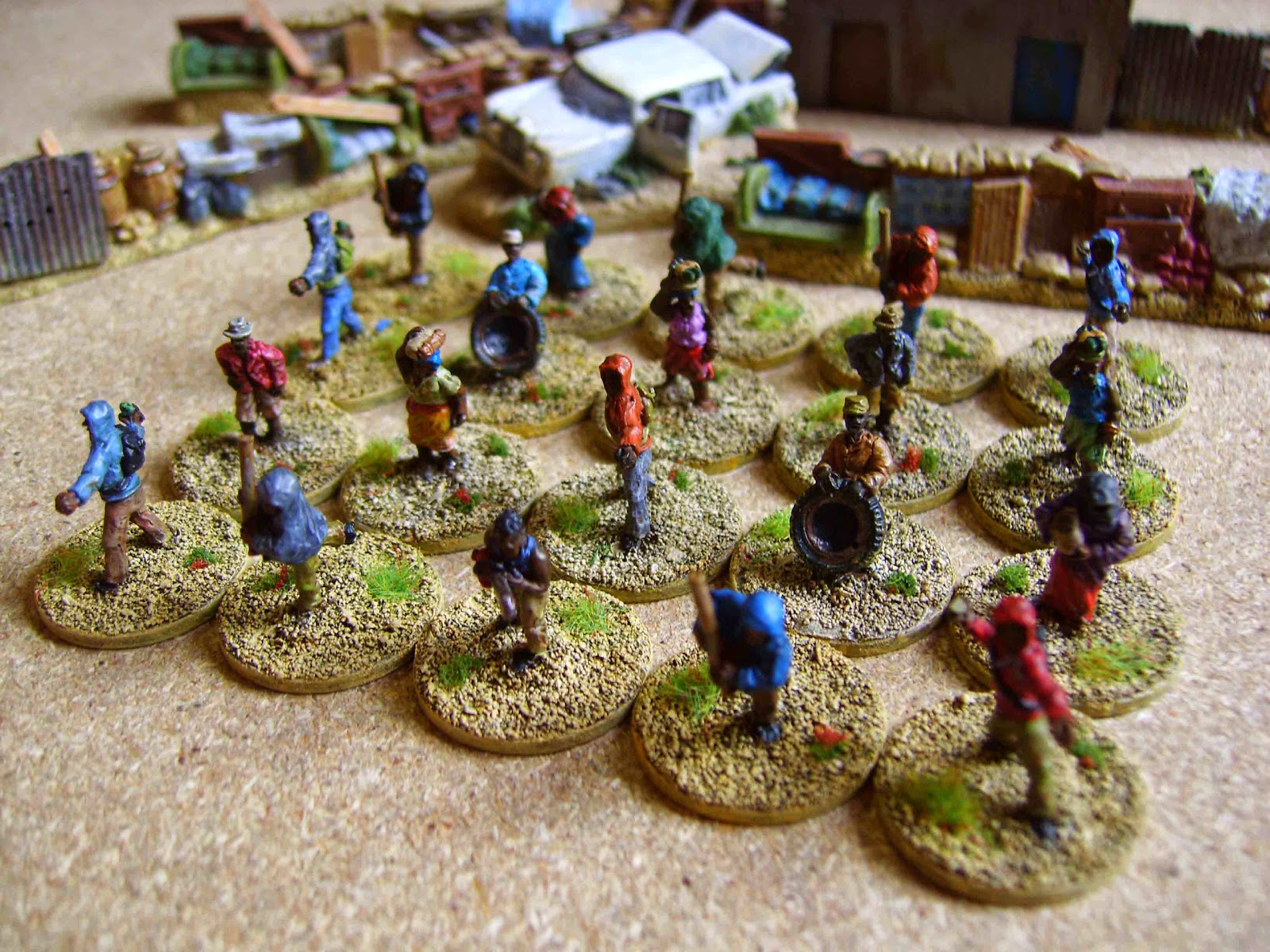 So far this week I've finished painting 20 single-based Somali civilians for 15mm-scale Force on Force.  This should be plenty for use alongside militia gunmen for Mixed Mobs (an ethically challenging prospect for opposing UN/US forces).

These figures are a mixture of Rebel Minis Modern Rioters for the 'hostile' blokes, plus Peter Pig AK47 Looters & Civilians, & Peter Pig Sudanese Women.  I think these figures all blend well together.  It was nice to paint some non-combatant & female miniatures for a change. 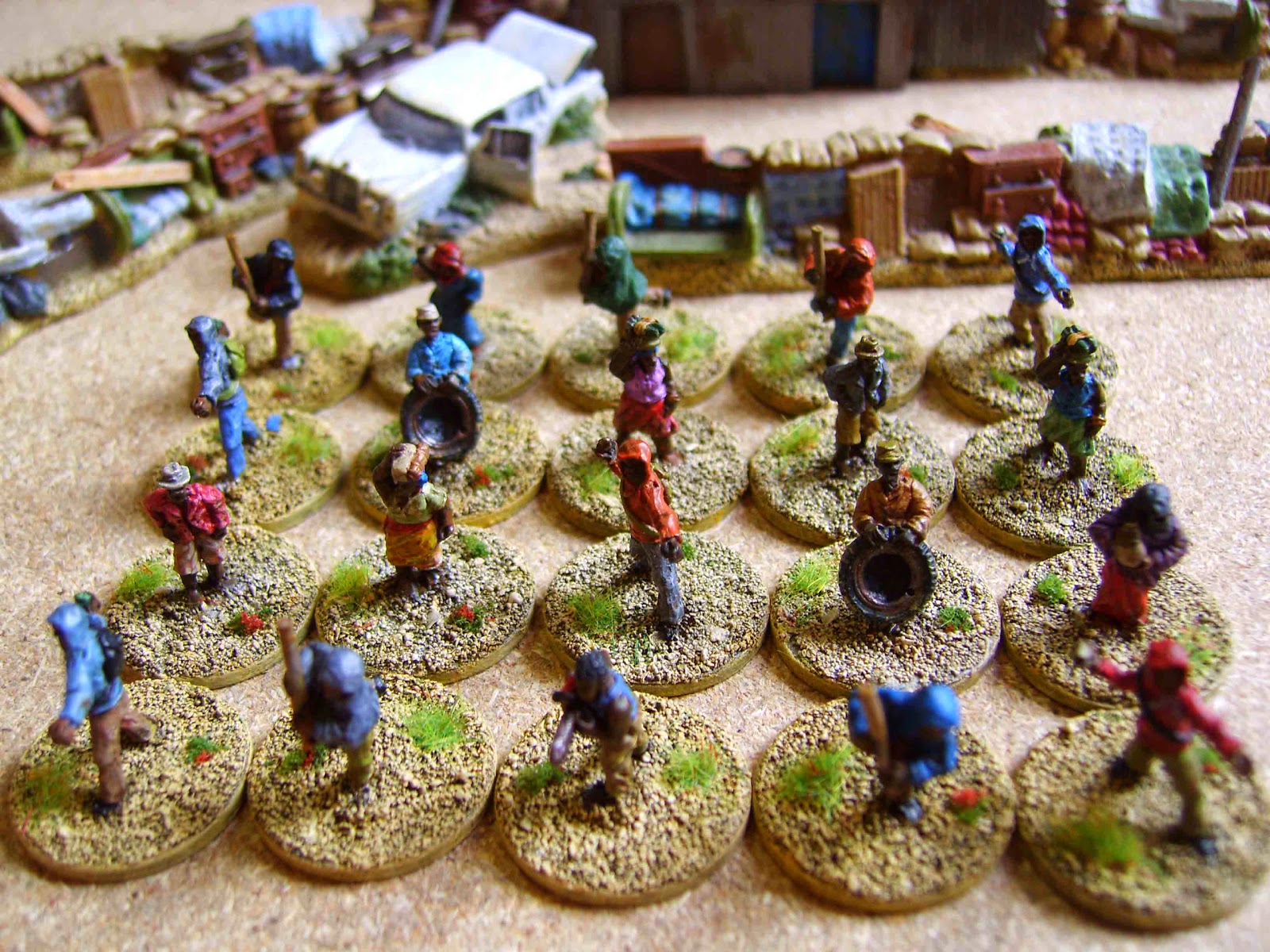