I finished my 3rd Unified Marine Corps walker at the weekend.  This one has what I'll call the 'Scythe' loadout of two chain cannons in place of the balanced 'Sabre' loadout of my first two walkers.  As background fluff these AFSs will be the 'Moa' design, manufactured by an Australasian corporation.  I'm thinking of  maybe having animal names for all the UMC vehicles, wheras the colonials will have more poetic or elemental designations for their mecha. 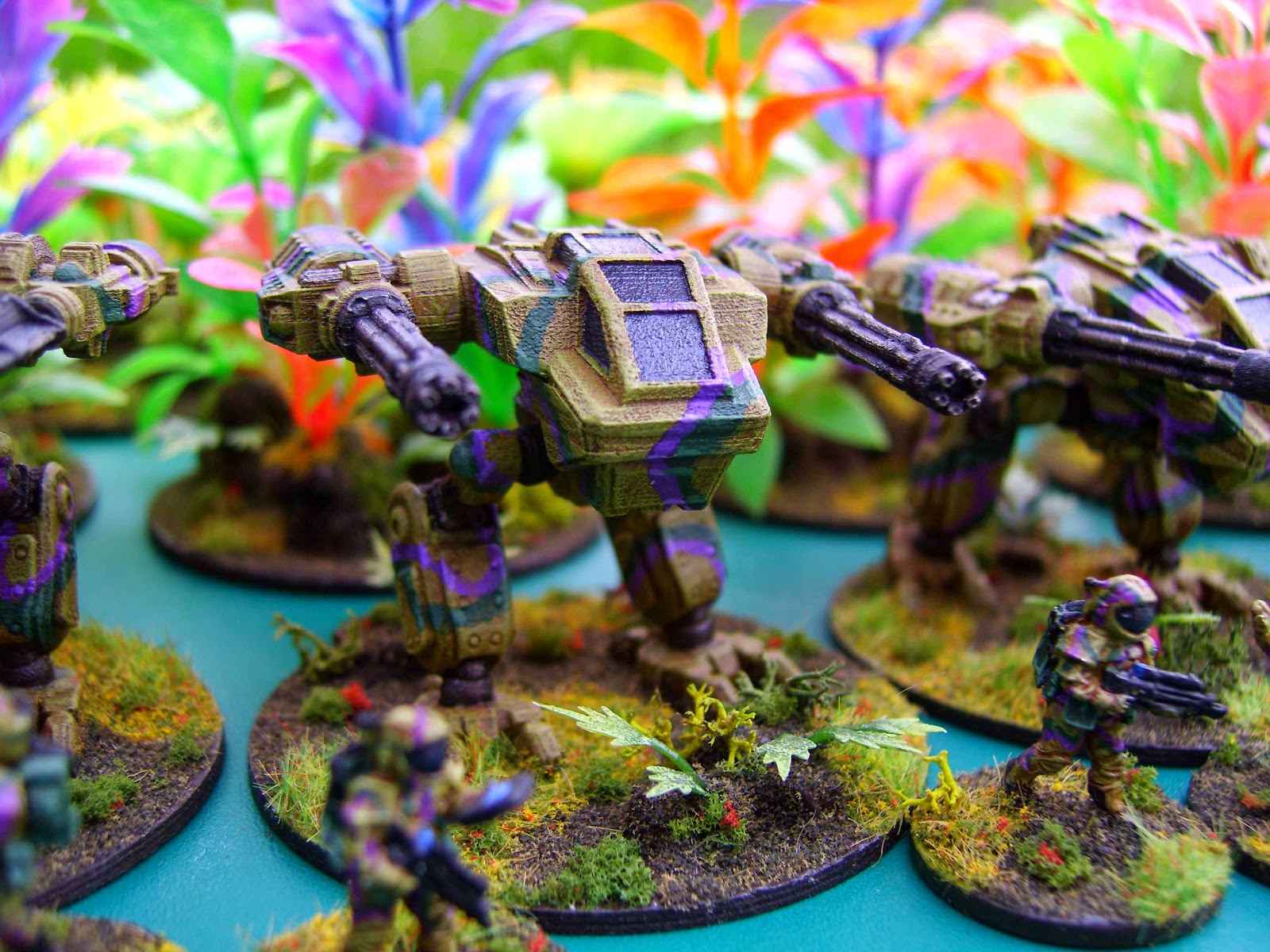 The models are 15mm scale resin Rebel Minis ViPeRs, which I really like aesthetically, & are easy to assemble, with minimal flash.  The only fiddly part was my personal choice to razorsaw them off their integral oblong bases, & mount on laser-cut circular ply, to match the look of my infantry.  It doesn't show that well in these photos, but the cockpit canopies are gloss varnished, to better suggest 'amoured glass'.

Below are Tomorrow's War stats that I have in mind for the Moa AFS (using the US AFS stats from the core rulebook as a basis):

Read more »
Posted by Pawn Cocktail at 20:09 No comments:

Over the weekend I painted & based-up another 8 'AIT-7 Ashigaru' combat androids for my Tomorrow's War Colonial force.  I have 2 flamethrower android teams to convert, then that's one 'cadre' finished.  Ultimately I'd like to double that number to complete my 'droid infantry.  Unlike the Human marine-heavy Solar expeditionary force, the army of the Colonials will comprise of a large number of androids & AI armour pieces.  These are the 'droid footsoldiers, but they won't be dumb cannonfodder...

For those familiar with Force on Force / Tomorrow's War, I was considering TQ:D6/M:D12 at first, but following the rules precisely they would have to be TQ:D8/M:10 as Tech Level 3 Bots.  This would make them better soldiers than their opponents in the Unified Marine Corps, as their Troop Quality & Morale would match, but they will have the various Bot advantages like everything being in Optimum Range, no penalties for firing when moving, Armour: 2D etc.  This might not be a bad thing though, it just makes them a challenging prospect.  With flamethrowers added in the mix, these 'droids could become the bane of the UMC.

The miniatures are the fantastically sculpted 'Shalur Mercenaries' from Rebel Minis.  The variety & quality of the Shalur poses is really impressive.

My Unified Marine Corps now have a 2nd AFS, with more on the way.  I went with a plain 'at rest' stance for this one.  Here are a couple shots of a recon force making it's way through the jungle of the colony world: 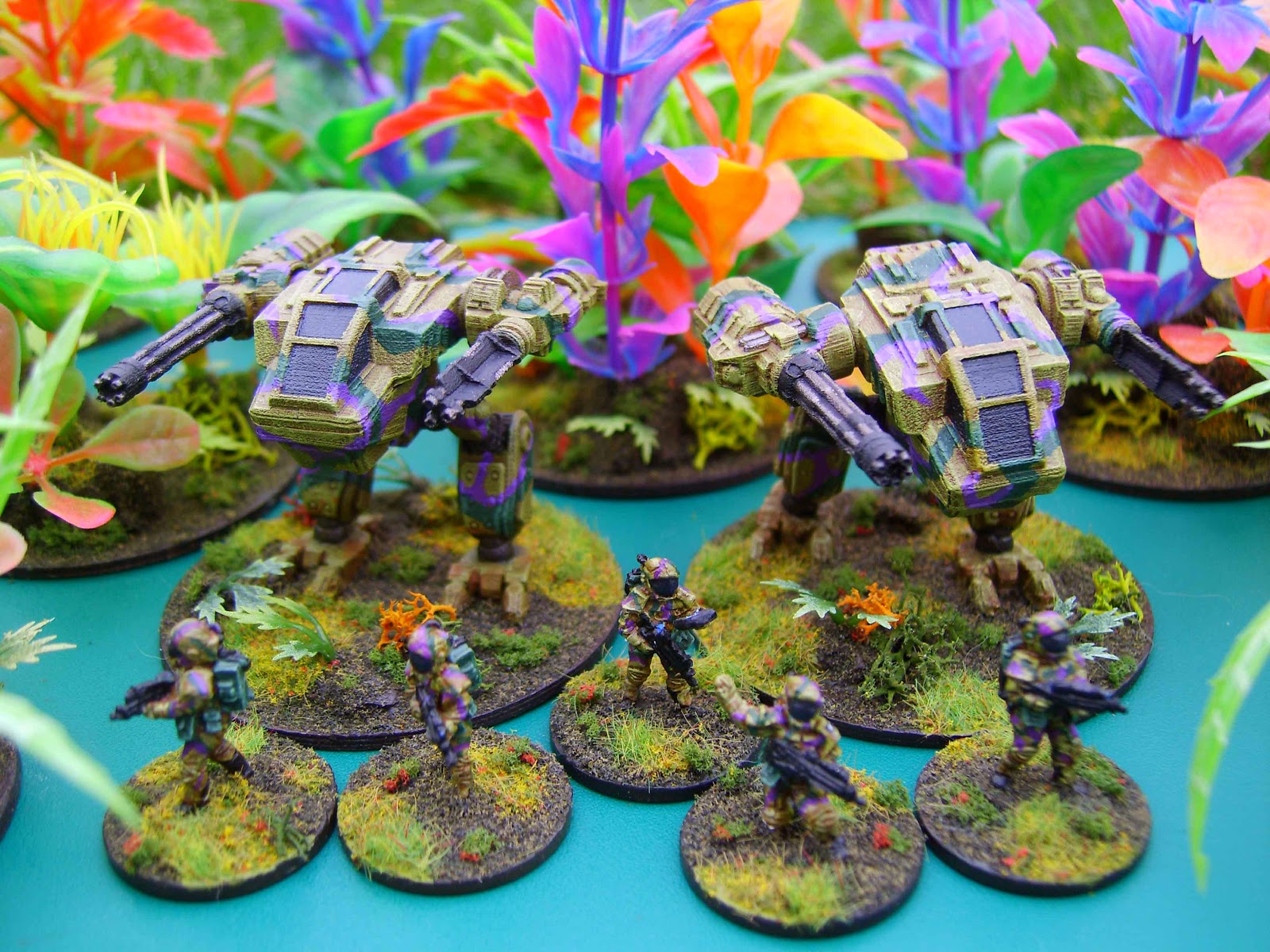 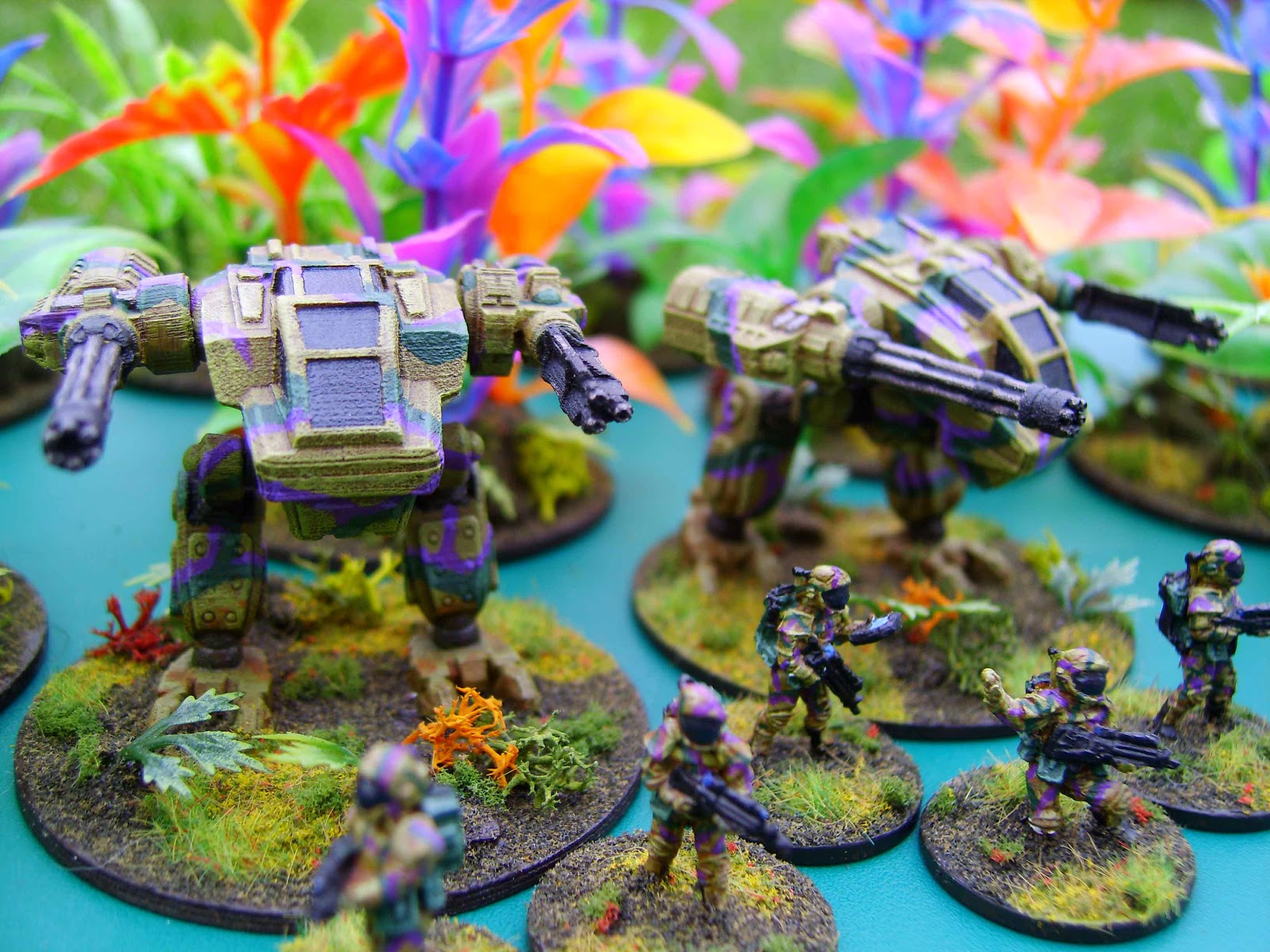 I finished my 1st mech-suit for 15mm scale Tomorrow's War this week.  Very pleased with it.  The model is the fantastic ViPeR from Rebel Minis, & I think I've finalised the Unified Marine Corps vehicle camo scheme now.  After my initial attempt on the Warthog scout/patrol vehicle, which came out more blade-like in pattern, I tried more creeper-like shapes on this AFS.  I will alter the Warthog's scheme to match this now. 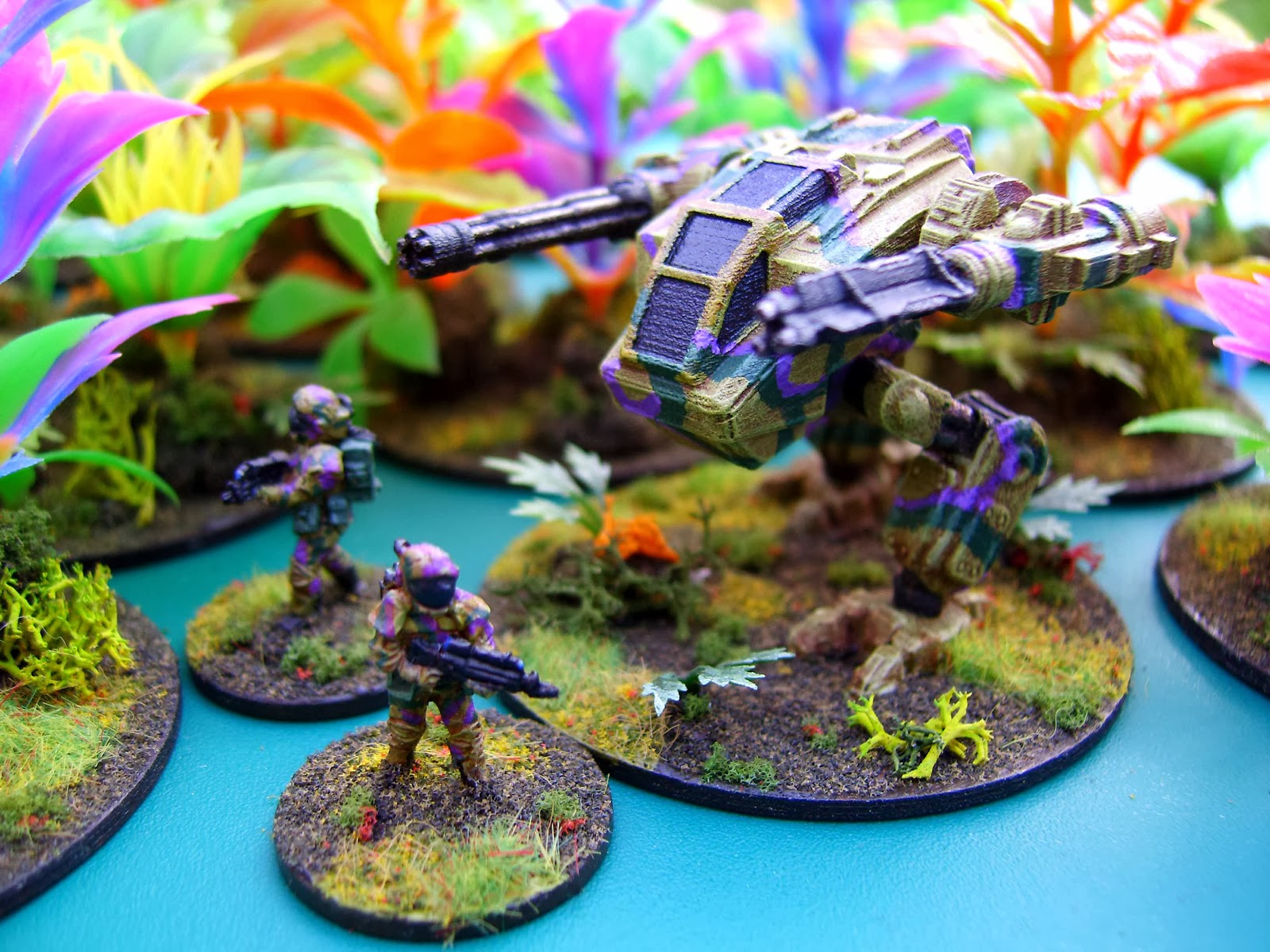 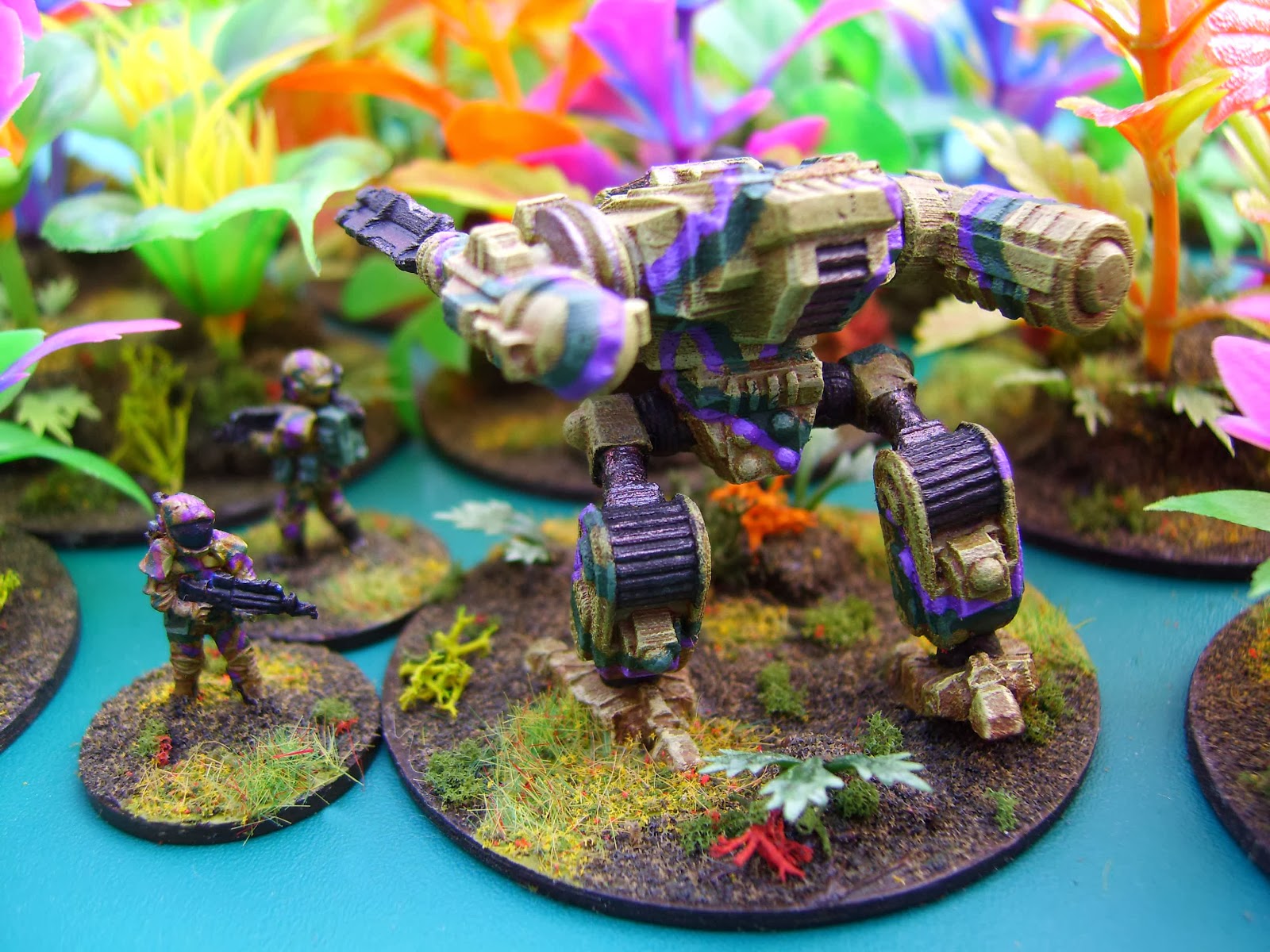 I haven't decided on a name for this class of AFS yet (suggestions welcome), but it is certainly heavily-armed for it's size.  I'm going to call that a chain cannon (anti-infantry/light vehicle) on the right mount, & a rail repeater (anti-armour) on the the left.  I'm planning to put together 2 squadrons of 3 AFS with this balanced weapon configuration, plus 3 'specialist' walkers - 1 with dual chain cannon, 1 with dual rail repeater, plus 1 with a labour/recovery loadout (only clamp/cutter arms). 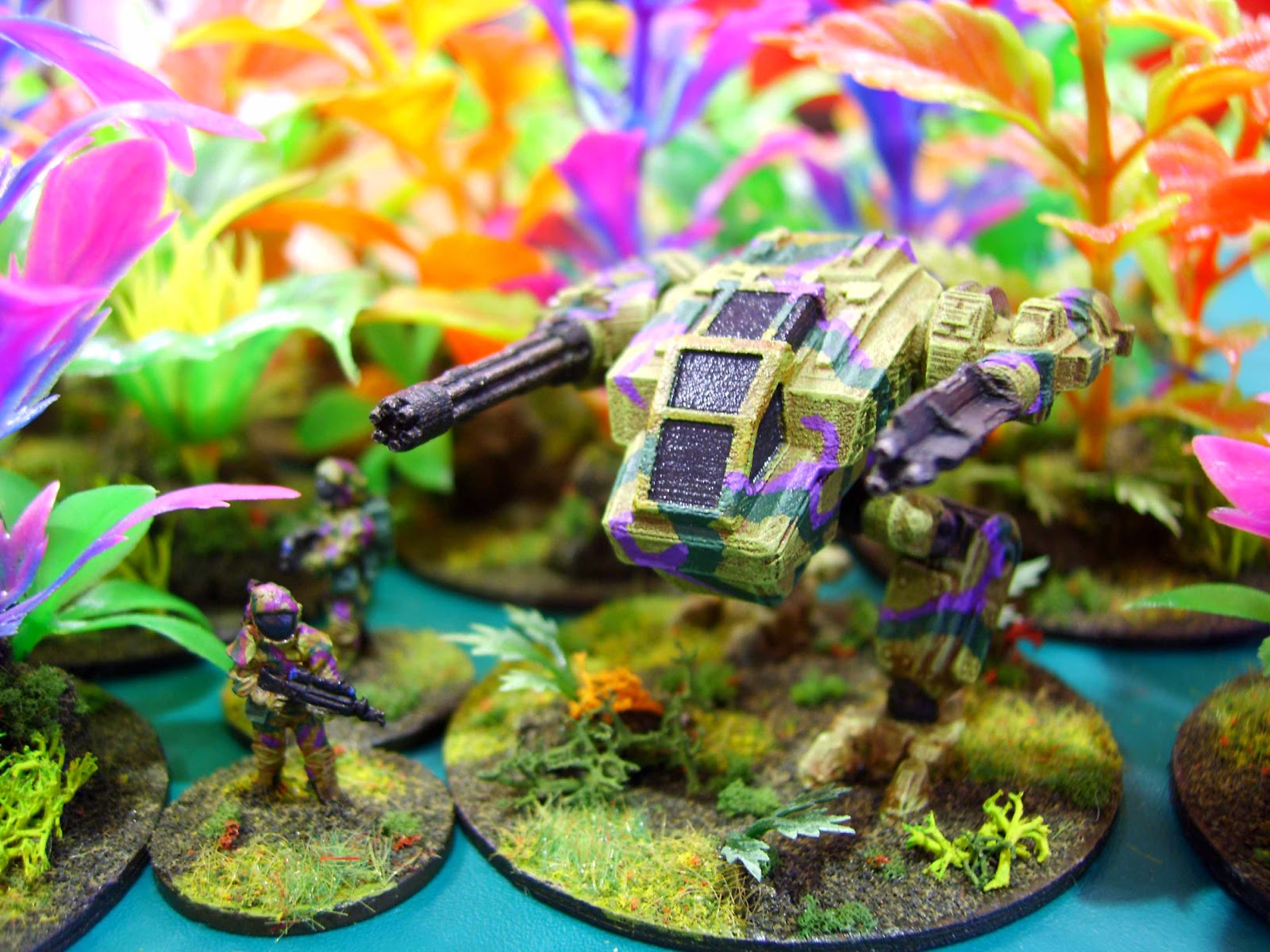 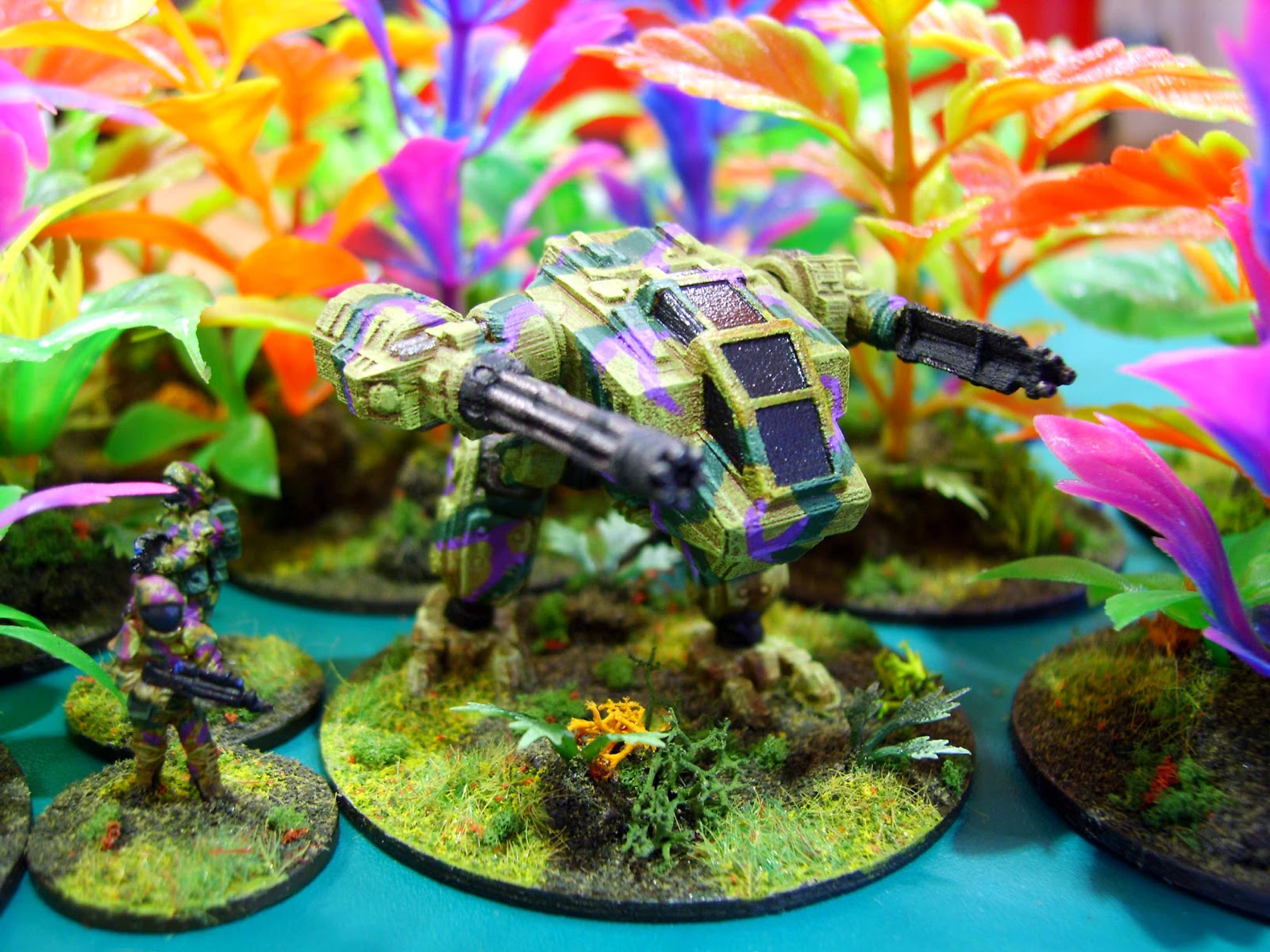 Back to Tomorrow's War here: today I finished four 'characters' for my Unified Marine Corps force.  Below are the company CO & a platoon leader.  For rank markings I used dots on the left pauldrons - the CO has 3, the platoon leader 2, & squad leaders have 1; but these guys also follow my Force on Force method of having the senior officer standing, & the subordinate kneeling, for easy-ID:

And below is a medic and a TAC (possibly calling-in an orbital strike!).  The figures are 15mm scale - Rebel Minis Earth Force Marines.

Another essential, if unexciting, piece of any dungeon - a corner.  I finished this piece today, & as with most of my 15mm scale Warhammer Quest sections, I stuck with the colour scheme of the tile from the original game.  Click on the thumbnails for larger views: 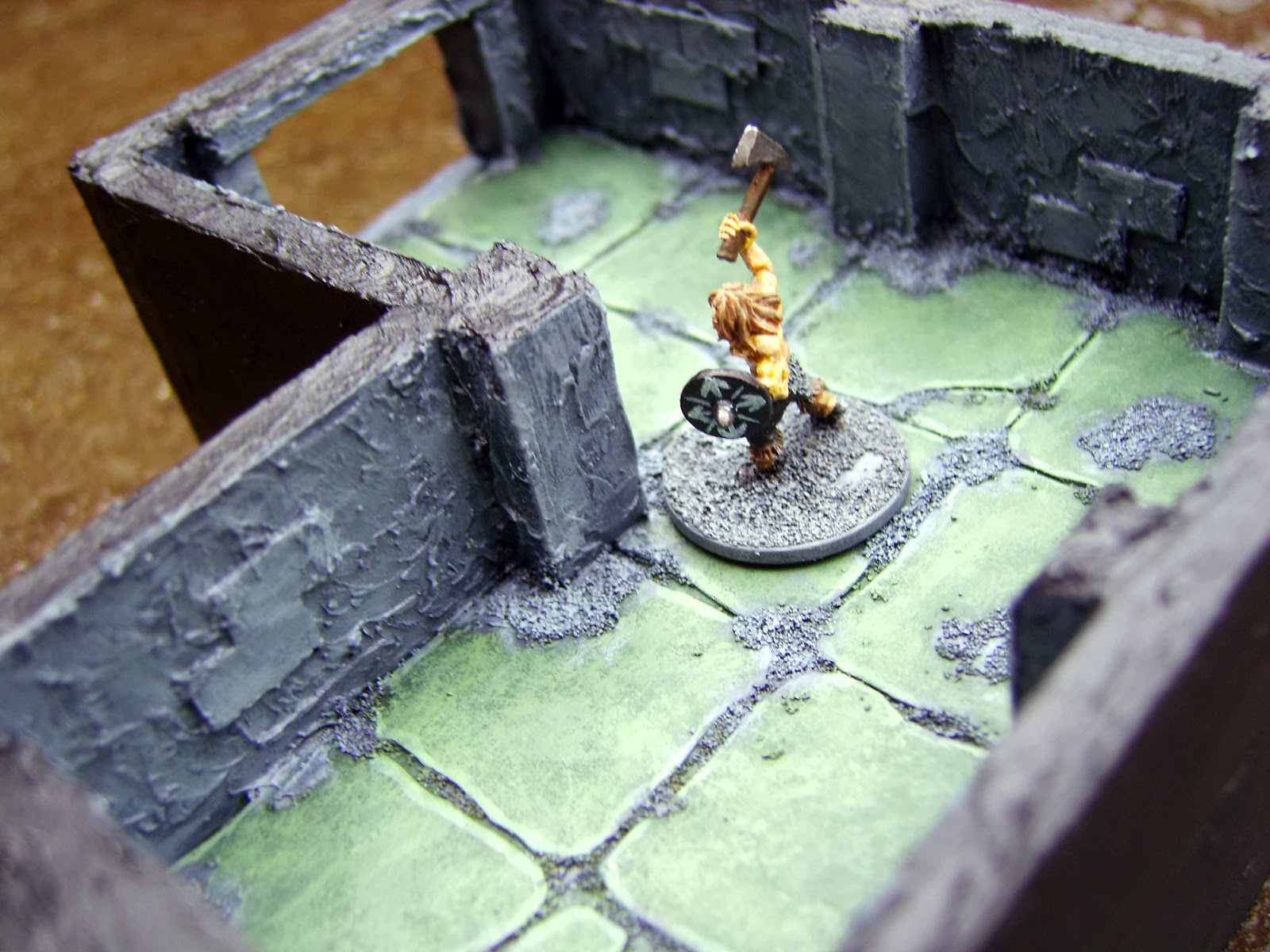 The figure is one of my Chaos Marauders (a Northlander warrior from Copplestone Castings Barbarica range).
Posted by Pawn Cocktail at 13:25 No comments: