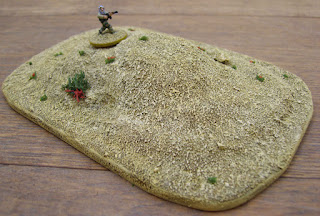 Secondly a large slope for a corner of the gaming board: 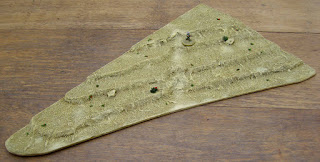 ...and below is the slope in cross-section to show the height: 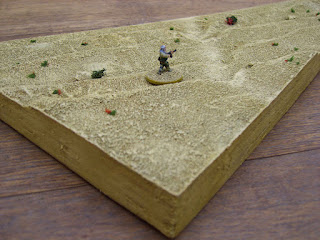 As promised, here is some terrain for Dom's planned Force on Force Falklands collection.  I think perhaps the look of the main flock is a little too 'summery', but since this terrain will probably be used for WW3 games set in Europe/Russia, it's probably fine.  Firstly, below are a couple of windswept rocky outcrops, using the same techniques as my Middle East hills, but with various Gale Force 9 flocks & Games Workshop static grass: 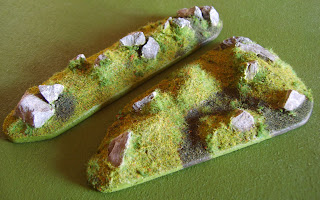 ... And below are 3 photos showing the set of 10 fences (including one converted into a gate as an after-thought).  Each section is mounted on a lolly stick (a very convenient base for 15mm scale fences!).  The fenceposts are sections of matchsticks held in place by Green Stuff, the horizontal beams are 3mm wide strips of card:

Read more »
Posted by Pawn Cocktail at 20:40 No comments:

Email ThisBlogThis!Share to TwitterShare to FacebookShare to Pinterest
Labels: Force on Force, Scenery

On Sunday I went up to my friend Tim's flat for a couple runs through an IDF vs. PLO ambush scenario, based on Korengal Ambush from the 'Enduring Freedom' Force on Force sourcebook.  It was a good refresher on the rules.  Our friend Dom came round, & now he is hooked on FoF.  He's going to collect British & Argentinians for Falklands scenarios initially.  I'm now making him a couple of grassy gaming boards & some Falklands scenery as a gift...

Here are the IDF I painted for the ambush game (I'm finally happy with the fatigue tones, though I'll add a net effect to the helmets & bits of static grass & flock to the bases): 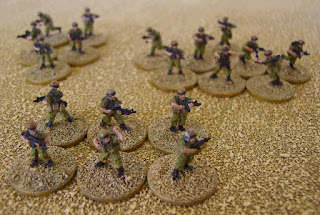 I finally got round to making a 2' x 2' desert gaming board for FoF.  I had the Contracting Trouble & Korengal Ambush scenarios in mind for this, but hopefully it will see plenty of use in all sorts of Middle Eastern (& Somali) engagements.  I will be leaving this one at my friend Tim's flat so I don't have to take it with me when I travel up there - I'll have to make another one for myself.  It's a thick chipboard base, covered with sand & drybrushed up through five stages.  I filled in the sides with tinted all-purpose filler to improve the look. 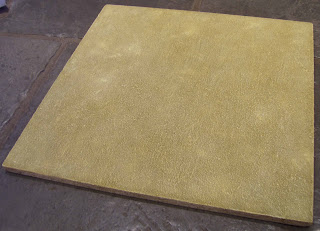 Posted by Pawn Cocktail at 23:35 No comments:

Nothing too exciting tonight - just a couple more Force on Force scenery pieces finished.  Below are a low hill & a rocky rise in the same style as the terrain in my previous post, but built up with layered offcuts of foamboard rather than polystyrene: 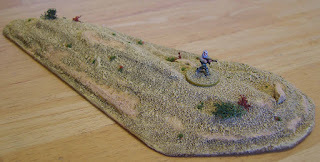 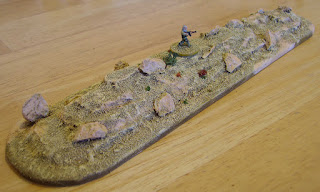 Hopefully soon I will be able to post photos of finished buildings & even a full terrain-filled board...
Posted by Pawn Cocktail at 21:17 No comments:

Some terrain for 15mm Force on Force now.  When I started collecting '1980s Lebanon' stuff for Force on Force last year, I decided to be more methodical than I have been with my longterm W40K hobbying.  I have been constructing & painting what I need to play on a scenario-by-scenario basis, starting with the 'Korengal Ambush' scenario from the Enduring Freedom sourcebook, which I am adapting to represent a PLO unit getting the drop on a Golani Brigade platoon. 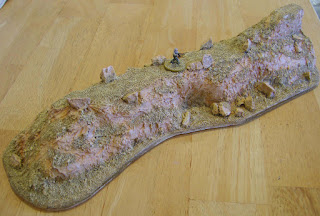 Above is a long ridge representing the western rise where the two ambushing cells are positioned.  I built it up from three layers of polystyrene on a plywood base, picked into a rough ridge, then coated with pre-tinted all-purpose filler.  I added stones as boulders for a bit of cover, & then a coat of sand to the upward surfaces.  To brake-up the monotony of what will largely be ochre/tan terrain, I went with a pinkish soapstone effect for the rock.  I've modeled the far end of this ridge in cross-section so that it can be placed up against a board edge.

I've also finished a pair of scrubby, rock-strewn areas for the west side of the board (below).  These are simply plywood bases with a bit of filler-texture & stones.  The scrub is a mixture of lichen & specks of flock.  I kept the soapstone theme for these rocks, to match the ridge:

I really like the tiny Battlefleet Gothic ordnance miniatures, & with no official Tyranid ordnance being available, I made my own markers.  My flagship will be a massive carrier capable of launching 10 markers in a turn.  There is no upper limit to the number of Tyranid ordnance markers that can be in play, & the 'Nids also have the option of taking markers as part of the fleet points limit, so I will need lots of these.  I used the small Warhammer bases, which are the same size as the card counters from the BfG box.  I don't like the look of the tall stems on GW studio fleet ordnance strips however, as I think they distract from the fighters & bombers themselves - & with durability also in mind, I trimmed peg sections from the top of spare flight stems to sit the ordance pieces on.

Below are my Tyranid fighter analogs, which are simply venom sacs from the 'Gaunt sprues (they reminded me of Yuuzhan Vong Coralskippers from the Star Wars NJO era).  Like my bio-ships, I gave them a gloss varnish for a gribbly carapace look: 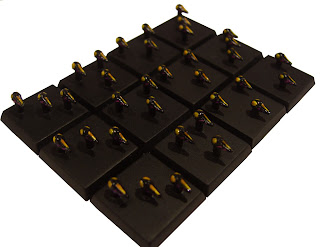 For my assault boat analogs, I cut the top sections from 'Gaunt spinefists, envisaging these as giant armoured ramming creatures carrying broods of Tyranid nasties into prey vessels:

Read more »
Posted by Pawn Cocktail at 20:43 No comments:

Another NPC finished, this time a street thug.  He is intended as a low-level opponent for my Inquisition campaign, or just as living 'scenery' for any underhive scenarios. This is the Joe figure from Hasslefree Miniatures, a very nice sculpt. 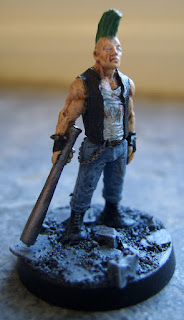 Posted by Pawn Cocktail at 22:33 No comments: