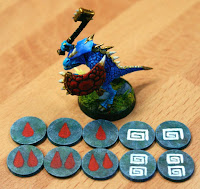 This week I painted some test markers for the Ronin Lustria side project.  This would be using custom Lizardman & Conquistador warband lists & the Osprey Wargames Ronin rules for skirmishes of 8-or-so figures a side.  First I painted these Fenris Games Ø10mm laser-cut discs in the same slightly-slimy stone style as I have been painting my Lustrian rocks & flagstones, & then I tried freehanding some symbols that hopefully lend a Lustrian feel - One blood drop signifies a Light Wound, two blood drops a Frievous Wound; one 'Aztec spiral' indicates a Stun, two 'spirals'  equals two Stuns. 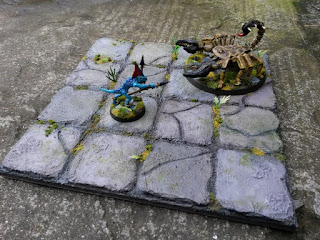 I'm a bit divided over whether I should drop the 'Ronin Lustria' idea & focus on my original Lustrian Warhammer Quest project - especially because I am a big fan of classic Samurai & chanbara films, so maybe I should use actual Ronin figures & play the game as intended (I would choose the late Edo period & create a little Yakuza gang & an honourable katana school to oppose them).  One of the reasons that I am considering 'Ronin Lustria' idea is to give me a reason to scratchbuild jungle & Lizardman building pieces.  But perhaps I could simply expand upon the standard subterranean Warhammer Quest tiles, & have some open areas for that.  Shown here is one of my test dungeon tiles for Lustrian 'Quest.  I'll probably add human-height sections of block walls to better capture the claustrophobia atmosphere, & allow all sorts of Lizardmen totem & skull decoration!

Any suggestions or recommendations welcome!
Posted by Pawn Cocktail at 14:59 4 comments:

Back to the steaming jungles of Lustria in the Warhammer world now - this week I made four pieces of scatter terrain for my Lizardmen collection.  I've never had any interest in playing Warhammer Fantasy Battles (& even less in having anything to do with 'Age of Sigmar'!), but I do like a bit of Warhammer Quest, & I've always wanted to have a little Lizardmen collection for the awesome combination of dinosaurs & Aztecs!  So I while back I started a slow-burn project to create a 3D dungeon set with a Lustrian theme.  Having been hooked by Osprey Publishing's 'Ronin' rules recently, I also thought I could use my Lustrian figures to have a few small skirmish games between these cold-blooded ancient ones & a band of marauding conquistadors from the Empire.

I built up small mounds of polystyrene on laser-cut ply discs from Fenris Games, & they textured them with coarse paint thickener.  I also pressed some stones into the mix.  After painting the bases, I flocked them with a mix of Gale Force Nine dirt & summer meadow, plus summer static grass & a few Gamers' Grass summer tufts.  I them carefully painted the 'rocks' in a few different shades of ochre grey & blue-grey, & then highlighted them.  At this point it almost seemed a shame to add the plastic aquarium plants...

..The mass of aquarium plants that I have collected over the years came in handy as I snipped pieces up, & glued them into holes that I poked in the polystyrene mounds.  I'm quite pleased with the end result.  I will do some scattered pots & vases & ruins for this mini-project next I think.  Looking forward to doing the highly-stylised Aztec block-work.
Posted by Pawn Cocktail at 20:16 4 comments: 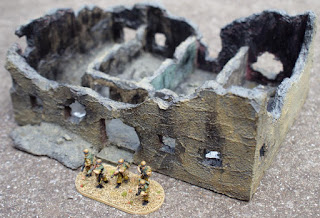 Here is a block of ruined apartments that I made for 15mm-scale modern Crossfire.  I used foamboard, textured with coarse paint thickener & sand; along with bits of cocktail stick, Gale Force Nine concrete chunks, & bits of plastic sprue for debris.  As this structure is mostly intact (the walls are still standing at least!) In Crossfire rules terms I will treat this as a building complex of two blocks, without roof cover, rather than 'ruins' (which don't block Line-of-Sight in Crossfire). 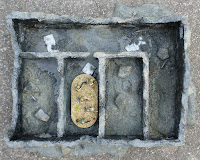 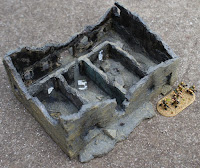 I have numerous other miniatures projects on the go, but given the hot sunny weather at the moment, I haven't been finishing much to post it lately.
Posted by Pawn Cocktail at 15:40 2 comments: