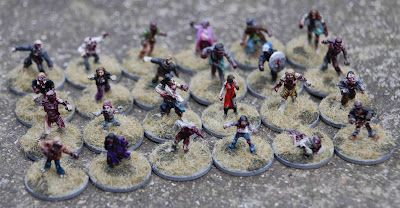 I've added a few more 'shamblers' to my growing 15mm-scale zombie horde.  These are the slow-moving traditional zombies of my post-apocalypse UK collection (there are also 'ragers' - fast moving, newly-infected zombies).  I've also repainted the edges of the bases in my zombie collection, so it's easier to quickly identify the different types of figures during games.  Shamblers have grey base edges, ragers have red, survivors have blue, non-combatants have white, & police/military have black.  The zombies pictured here are all from Khurasan's undead range, with the exception of a couple Rebel Minis figures (the riot police officer & the lady in the red dress).  They are all mounted on 1p coins.
Posted by Pawn Cocktail at 16:36 4 comments: 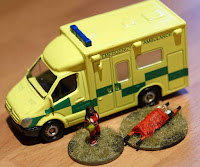 Following-on from my air ambulance, here's a normal ambulance, shown here with the paramedic & stretcher patient from my previous post.  I will model another three medics & probably another stretcher so I have enough for both vehicles.  This is another Siku die-cast model at a scale that looks right, & conveniently pre-painted to a decent standard.

My growing collection of emergency services should be very useful in zombie apocalypse scenarios.  I think that patient on the stretcher suffering enraged spasms may prove to be a bit bitey... 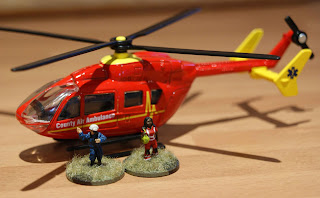 A few months ago I bought this air ambulance, along with several other vehicles that looked to be the right scale for my 15mm zombie apocalypse figures, & I've finally got round to painting a pilot & paramedic to crew it.  The helicopter appears to be modeled on the Eurocopter 135 G-WMAS, & other than the tail rotor configuration, it's very accurate to the air ambulances commonly seen in the UK - the colour scheme & markings are spot-on, which adds to the 'authenticity' that I'm aiming for with my rural English setting. 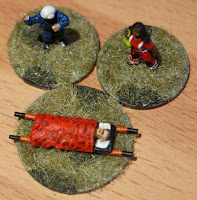 The die-cast air ambulance is manufactured by Siku (Model #1647), the pilot is actually an IDF vehicle commander from Peter Pig's AK-47 Range, & the paramedic is a lady from the Rebel Minis Modern Civilians pack.  I bulked-up the woman's handbag into a medical kit using Green Stuff, & had a go at using the same to sculpt a visor on the pilot's helmet, but it didn't look convincing, so I left the visor off.  I'm on the lookout for a suitable male figure for another paramedic to complete the crew now.  I also painted a bloke on a stretcher ready to be airlifted - another Peter Pig piece from the Heads and Odds range. The bases of both standing figures are 1 pence coins, whilst the stretcher is on a slightly larger laser-cut ply bases from Fenris Games.  All the bases are flocked using Gale Force Nine dirt & dead/winter static grass.
Posted by Pawn Cocktail at 15:01 4 comments: