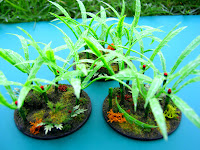 Next up... more jungle scatter terrain for 15mm Tomorrow's War!  Again, I've used plastic aquarium plants.  Not sure what to call this stuff.  Maybe 'mammoth grass'?  It comes set out on a regular grid, so I sliced it into pairs & trios so I could glue it out more haphazardly on the Fenris Games Ø50mm ply bases.  To hold them down more firmly, & to reduce the flatness, I textured over the ground using premixed filler/thickener. 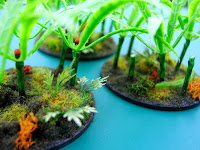 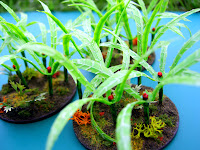 I decided to paint the pegs which hold the leaf-blades in place as a flower or perhaps fruit.  I think this makes them look a bit more unusual.  The colour of these plants is very vivid, so I tried to break it up a bit by painting the veins of the leaves in pale green.  I enjoyed adding other details to these bases, such as severed stems leaking glossy sap, & a fallen blade.  So far greens have been the dominant hues of my growing alien jungle, but I'm about to try using some of the more garish plants I have in stock...
Posted by Pawn Cocktail at 19:06 No comments: 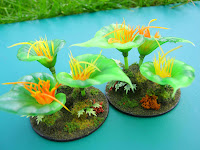 Following on from my post yesterday, this morning I finished these 'pitcher' plants.  They are mounted on Ø50mm ply from Fenris Games, & use the same flock & undergrowth as my first scatter pieces.  Again the large plants are plastic aquarium decorations.  The materials are very cheap, & putting these bases together doesn't require as much precision as making buildings, although the process definitely benefits from batch-producing each stage of the assembly/dressing.


I may buy some water-effect resin to try & fill the 'bowls' of these pitcher plants, but for now I have gloss varnished inside each one with Games Workshop 'Ard Coat.
Posted by Pawn Cocktail at 10:05 No comments:

This week I put together a my first set of scatter terrain for Tomorrow's War.  After initially planning an urban Bladerunner/Ghost in the Shell inspired setting, I'm favouring an alien jungle world now, because it's something that I've never tried before.  This would be a colony planet where Earth forces are battling separatists.  I've had Avatar's Pandora & Warhammer 40,000's Catachan in mind, although less deadly to Human life.  I think I'll have to decide on infantry/vehicle/mech camo schemes based on my finished terrain. 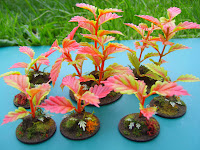 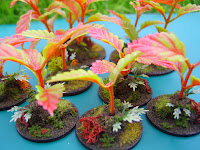 I've had this plastic wreath of red & lime green leaves for a few years, but never had the need to make any jungle scenery before now.  The quality of these plastic leaves is particularly good, with a waxy, detailed surface, which I have varnished using Games Workshop 'Ard Coat to really bring them to life.  Sections from this wreath formed the centrepieces of this scatter terrain, whilst I have used hobby lichen & offcuts of smaller aquarium fake plants (highlighted & varnished) for the undergrowth.  The 3 different flocks are from Gale Force Nine. The bases are Ø30mm & Ø50mm 1.5mm thick laser-cut ply from Fenris Games.  Here are the scatter pieces with a 15mm figure for scale: 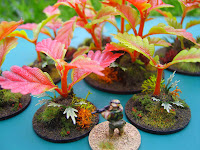 In Tomorrow's War rules the effects of this jungle terrain will be limited to the 'outer perimeter' of this scatter, rather than actual line of sight.  The individual pieces within the 'jungle area' can be moved as needed to accommodate figures during games.  Today I bought a couple packs of more vividly-coloured plastic aquarium plants. I think the trick will be to limit the number of colours on each base so that overall there is a varicoloured mix to the jungle, but individually the bases don't look too riotously messy.  Other terrain ideas I've had so far for this setting are white-washed futuristic colony buildings, weird rock formations, murky lakes with giant lily pads, & overgrown space shuttle wreckage.  Any & all suggestions for terrain welcome!
Posted by Pawn Cocktail at 16:21 1 comment:

Having finally bought some large 1.5mm thick circular bases, I've put together my first civilian mob for 15mm scale Force on Force.  After toying with the idea of individually based civies, I've opted to split my civilian mobs between two Ø50mm bases, each with around 6 figures on.  This makes for easier movement of mobs, whilst representing their abstract nature in rules terms, but still allows a little flexibility in placement in relation to tabletop scenery.

The bases are laser-cut 1.5mm (to match the thickness of the coins I use for infantry bases) ply from Fenris Games - I highly recommend these bases.  They are very durable & have absolutely no warping.  The civilians are a mixture of Modern Civilians from Rebel Minis plus 'AK Looters', 'AK Ammo Carriers', 'Sudanese Women Civilians', &  'WWII Refugees' from Peter Pig.  I went for a 'refugee' theme for this mob, with most of the figures carrying valuables, children or babies.  I'm planning to use a more relaxed street/market theme for my next mob.

I will use these in Iraq / Lebanon games, but civilian mobs are more integral to Day of the Rangers (Black Hawk Down) battles - I'm looking forward to putting together civilian & hostile mobs for this next.
Posted by Pawn Cocktail at 18:28 No comments: