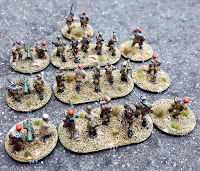 From experience of playing a few games of Crossfire now, I decided to modify how I paint ID markings for my infantry bases.  Playing with more than one platoon quickly demonstrated the difficulty in telling platoons apart (which is necessary for command structure in-game) - so I've settled on painting the edges of my bases in national flag colours to denote platoon, & using small white (or black) bars on the rear centre to denote section (squad) number.  HQ section elements have a wide bar, Section 1 elements have one thin bar, Section 2 have two thin bars, etc.  I was concerned that the coloured edges would be too intrusive visually, but at this scale, & because the players are usually looking down on the tabletop, I think that they strike a great balance between blending-in, being thematic, & being practical.

Here are two examples of this new ID scheme - on the left, my 1980s Syrian AT commandos with dark green edges, which I chose because the stars on the Syrian flag at that time were green, & these are elite fighters; & on the right is one of my Syrian mechanised infantry platoons, with red edges.  I have another mech infantry platoon under construction, which will have white edges, & the other band colour from the Syrian flag, black, will be reserved for if I add another mech infantry platoon to reach a full company.

My two IDF platoons will use blue & white edges, as per the Israeli flag, whilst the two platoons of French Foreign Legion patatroopers (2e REP) that I've been painting up as an overdue gift for my friend Tim will have blue & red edges (Section Bleu et Section Rouge).
Posted by Pawn Cocktail at 22:44 No comments:

A couple more pieces of scatter terrain for Ronin & Chain of Command games - some moss-covered rocks. Same recipe as my other recent pieces: small patches of rocks, & overgrown rocks.
Posted by Pawn Cocktail at 17:42 No comments:

Here is my Yakuza buntai (gang/group/band) for Osprey's Ronin skirmish game.  I have chosen to focus on the late Edo period for my collection - the twilight era of the Samurai, as depicted in the 'Zatoichi' & 'Sleepy Eyes of Death' films, 'Yojimbo', 'When the Last Sword is Drawn', '13 Assassins', 'Lady Snowblood', 'Bloody Shuriken', 'Twilight Samurai', & many other classics of Japanese chanbara cinema.  So I have being painting this gang of dastardly Yakuza, who will face justice at the hands of my next buntai - a small group of swordsmen from a Koryu (weapon school).  I may also supplement this with a Peasant buntai, to be terrorised by the local Yakuza.

This is my basic 95 points Yakuza roster - at the front there are five shikaku (thugs) armed with katanas.  The bald bloke in the back row is the gashira with a katana: a lieutenant of the local boss.  He is slightly more skilled than the thugs, & has the Commander ability.  Either side of him are a pair of yotamono (ruffians) with ararebō (small clubs - I made these by trimming down spears, & molding the iron studs using tiny balls of Green Stuff putty).  These ruffians are cheap, & even less skilled than the five thugs, but useful for boosting the numbers... plus the gashira has the option to cut one down as a 'morale booster' if the gang look to be routing in the face of determined foes!  Finally, to the gashira's far left is a thug with a teppo (matchlock arquebus) & katana (although I'm trying to source a sheathed katana for his obi [belt]).

My basic Koryu buntai will also total 95pts, but for comparison, it will feature only three (very skilled) swordsmen.  I have three more figures in progress (two deadly ronin-for-hire, & another teppo gunman) which will bump the Yakuza gang up to 150pts for slightly larger skirmishes; & I can match this for the Koryu by adding three more junior swordsmen.

Here are some close-up photos, showing the patterns that I lavished on much of the clothing for the Yakuza.  I'm pleased with the results - I think it really brings them to life  :-)  I didn't want this buntai to look uniformed, but I did want to tie-them together visually on the tabletop - so I focused the palette around moody blues & purple.

Finally, I couldn't resist reworking a couple of the group shots in black-&-white, to capture the essence of those classic chanbara & Samurai films which have been such an inspiration for this little project.

Most of these figures are from North Star, while the ruffians with converted clubs & the thug with the arquebus are from Perry Miniatures.

Posted by Pawn Cocktail at 17:20 No comments: 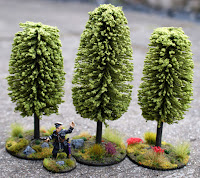 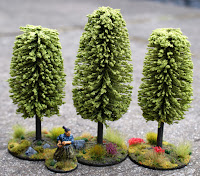 Nothing too exciting today, just some trees which I've based up for use in Ronin & Chain of Command games.  First I glued four 1p coins & one 2p coin on top the laser-cut ply disc bases, to make them nice & weighty on the tabletop, & then I stuck the trees on top, & textured overt he coins & between the roots with coarse paint thickener.  Then finished-off with my usual mix of flock & grass tufts, as mentioned in previous posts.

I've had the trees a few years, so I don't remember the manufacturer, but they are particularly sturdy, & their 'leaves' don't fall off the wire bristles very easily, which means that they're nice & robust for wargaming.

Posted by Pawn Cocktail at 22:42 No comments: