This week I finally finished my 2nd IDF infantry platoon, for 15mm-scale Crossfire. All the figures are from Peter Pig's AK-47 Range.  These represent a force of the Golani Brigade - the 1st platoon (on the right) is intended to be a mechanised infantry platoon, armed with Galil assault rifles.  I've posted photos of them with their M113 APCs previously.  The 2nd platoon (on the left) are intended as Sayeret Golani (the brigade's elite recon), armed with a mixture of Galils, M16s, & AK-47s.  In the background is an attached squad of combat engineers (centre), 3 sniper teams (left), & a .50cal HMG team, Military Working Dog team, & Forward Observer (right).  Looking forward to getting these on the tabletop battlefield! 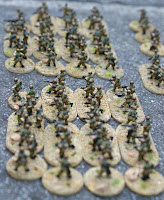