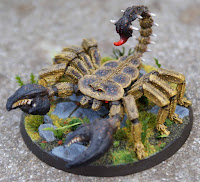 Today I finished the first Large Monster for my Lustria-themed Warhammer Quest set - a gigantic scorpion.  This is a very old Games Workshop model that I picked up a few years ago in a clearance sale for £3.50 - direct from GW Online of all places!  The sculpting is a bit clunky & old-school, but it has a lot of character, & was certainly good value for money.  A scorpion body should really be elongated, & the tail much longer for effective striking, but this does the job for dungeoneering.  I based the colour scheme on a Mexican scorpion that I liked the look of - I wanted something more earthy to offset against my brightly-hued Lizardmen. 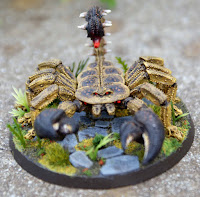 Following the size logic of giant & gigantic spiders in Warhammer Quest, I'm going to call this a gigantic scorpion, & count it as a Large Monster, because it required a Ø60mm base (2x2 dungeon squares).  It will probably need a few Wounds added to it's profile to account for being potentially open to more Warriors attacking it at once, & a slightly higher Gold value as a reward for defeating it.

Below are various photos of the finished model, including one with a Saurus Warrior for scale, & one of the base before affixing the model (click on an image for an enlarged view). 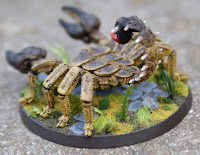 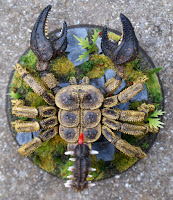 Continuing with the creation of a Lustria-themed set of Monsters for Warhammer Quest, this week I painted 'D6' Saurus Warriors with spears.  The spears grant them the ability 'Fight in Ranks' (attack from 2 squares away).  Following-on from my first Skinks, I really enjoyed painting these Lizardmen in the same scheme - the colours are fun, (scarlet & turquoise are my favourite colours), as are all the Aztec-like details on these effectively sentient dinosaurs. 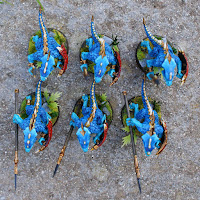 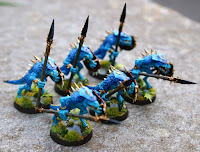 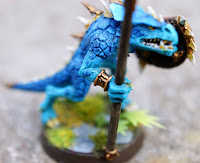 These newer GW Saurus figures are nice, with enough variety on the sprues to make each one individual, although the available poses are much more limited than for the Skinks.  This makes sense, as Skinks are intelligent & quick, wheras Saurus are slow-witted; but I decided to carve into the necks of two, to enable simple repositioning of their heads in more interesting angles.  It was a really easy change, but I think it's effective at making them a little more dynamic.  I've picked up some packs of Temple Guard bits (shrunken heads, jawbones, tusks, spikes, golden tags, & other fetishes) for personalising my Lizardmen further, but I will save these for making some Scar-Veterans out of the basic Saurus first, & a few leftover bits may get added to the lower-ranking Warriors later.

As recommended, I painted the shields separately, & noticed that the Saurus look quite good without them too.  This has given me the idea to put together six more, but with obsidian knives made from the spear tips, & no shields.  I'd slice-off the gilt spike on the back of the head-shield, & probably file-down the spine spikes too, & call them 'New-Spawns' - freshly-spawned Saurus with worse stats than the baseline Warriors.
Posted by Pawn Cocktail at 17:10 6 comments:

At the weekend I painted up this pair of Merkava Mk 1s for my 15mm-scale Crossfire IDF force.  Putting aside issues of politics & ethics, the Merkava (Hebrew for 'Chariot') series are my favourite tanks, mostly because of their unusual 'futuristic' look that came about from clever design intent (e.g. the low profile, & added crew survivability from having the engine block at the front).  These ones feature the stowage cages on the rear of the turrets, that in reality were fitted with short dangling chains to prematurely detonate RPGs aimed at the rear of turret ring.  They are even capable of cramming a few soldiers in the rear via a large hatch, although in reality this was mainly used for casualty evac under fire, & required removing a portion of the stored shells.  After the 1982 IDF invasion of Lebanon, Merkavas began to be developed further, with things such as their 60mm mortar being made operable internally (always a good idea!), & having a paraxial .50cal HMG mounted atop the main gun.

These 7.5cm-long models are from QRF, whilst the commander figure is from Peter Pig. They are nicely detailed, especially for 15mm-scale, & my only criticism is that they are slightly lacking in height compared with the real tanks, although this is only evident when infantry figures are placed next to them.  I have left the hatch MGs off for now as the QRF weapon scale is quite 'true-scale' compared to the chunkier, wargame-friendly Peter Pig MGs that feature in most of my collection.  I'm hoping I will be able to source some of the MAG MGs as seen on my M113s to attach in the pin-holes on the turret tops, so there's a uniform look to my IDF.
Posted by Pawn Cocktail at 21:19 2 comments:

Last week I painted-up 'D6' Lizardmen Skinks with (poisoned) javelins, for Warhammer Quest!  I went with a fairly 'official' colour-scheme, albeit with a slightly more neon tetra look (& also inspired by some of the more garish lizards & snakes on Attenborough's 'Life in Cold Blood'), as I think it looks so good on these figures, especially in contrast with jungle scenery & the gold.  I'm certain the Games Workshop colour scheme was inspired by the famous Aztec double-headed serpent artifact. 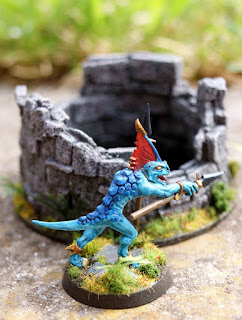 About seven years ago (when I last GMed a Warhammer Quest group), I finally gave up on 28mm-scale dungeoneering when I made the classic mistake of assuming £7.20 was the price of three Skaven Poison Wind Globadiers from Games Workshop (not reading the small print of "1 figure included").  At the time I threw my hands up in the air & lamented that I'd never be able to afford to populate my WQ dungeons with additional Monsters at the ever-rising GW prices (Globadiers are just a low-level foe).

This led to my (currently on-hold) 15mm-scale Warhammer Quest project... I'm pleased with how my tiny scratch-built dungeon tiles turned-out, but despite the excellently-sculpted 15mm-scale figures, this scale feels a bit lacking at times in terms of detail for this type of gaming. 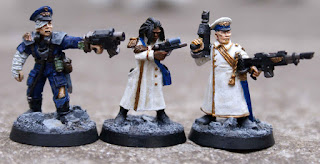 This weekend I finished painting my Imperial Navy officer & pilot for 'Inquisimunda' (Warhammer 40,000 skirmish/adventure games using the Necromunda rules).  I've always imagined Imperial Navy officers as very prim & proper, looking down their patrician noses at the uncouth 'ground pounders' of the Imperial Guard, especially given the staggering scale & power of space vessels in the Warhammer 40,000 universe.  Likewise for the pilots of the Imperial Navy, I see them as a bit elitist.  So I've gone with a formal-dress-whites-with-plenty-of-gold-trim look for this Imperial officer, to match the chirogeon that I painted a while back; whilst the downed pilot has an RAF-like uniform.  I imagine that the officer is likely a second-tier bridge officer, or perhaps aide to a captain or even admiral, whilst the unfortunate pilot has had his fighter or shuttle shot down.  I was undecided about whether to introduce another colour to the palette by having blood on the bandages, so I have left it off for now.  I imagine his arm & side of his head to have been burned escaping the wreckage. 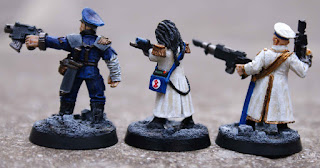 Both the officer & the pilot are from the old Games Workshop 'Colonel Schaeffer's Last Chancers' (penal legion) collection - nicknamed 'Hero' & 'Driver' respectively.  I think the backstory for 'Hero' was that he refused an order from his superior that would have seen his whole platoon wiped-out in a pointless suicidal charge (so he was sent to the penal legion, for redemption &/or death); whilst the fluff for 'Driver' was that he was a gifted driver/pilot, but had a penchant for joyriding, & after stealing & crashing a planetary governor's recreational vehicle, he was court-martialed.  Anyway, I picked-up a few of the 'Last Chancers' minis years ago because I liked the look of them - they are very characterful, & should be great for Inquisimunda scenarios.  The chirogeon meanwhile, is an EM4 'ganger' figure. He stands-up nicely at 28mm next to the other officer, although the pilot is particularly tall individual (with massive feet!) Still, it's within natural human variance - especially given the vast diversity of planetary environments within the sprawling Imperium.

The pilot is equipped with a bolt pistol, gladius, & grenade; the chirogeon has a needle pistol & medi-pack; the officer boasts a laspistol, lasgun, & katana! (perhaps a last stand against boarders?) This project allows me to collect a little bit of everything in the Warhammer 40K universe, without the incredible expense of the ever-increasing prices  :-s

Yesterday I put the finishing touches to my 4 M113 transports for my 15mm-scale Crossfire IDF platoon.  I say "finishing touches", but having taken these photos I've spotted that I need to paint the goggles on some of the drivers, & I'll probably add a wire aerial to the command vehicle...  These are excellent castings from Peter Pig - I love how each model came with different stowage, making each one really unique.  One of them has TOGA spaced armour, but even with that, these APCs are notorious deathtraps once the RPGs start flying!  Also, the TOGA armour negates the amphibious ability of the M113.

Disclaimer:  I am not a default supporter of the Israeli military, but merely interested in recent history in the region. 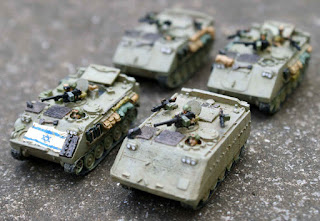 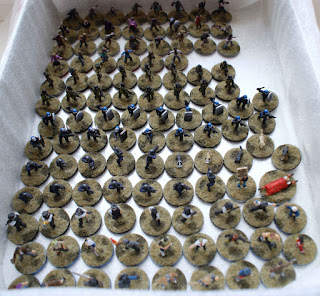 It's been a busy month & I've got very little miniature stuff done.  So as a filler, here's a photo of my 15mm-scale zombie collection.  Survivors are at the front, followed by police, soldiers, & then Infected at the back - I have bags of zombies still to paint-up...

I'm still undecided as to rules to use for these.  I like a lot of the elements of Ambush Z, but I'm looking for something that focuses more on a group of survivors, & could be run with me as GM controlling the the Infected & authorities, whilst a group of players each take on the role of a single survivor.  I'd also like there to be an element of tactics within the combat itself, similar to in the Ronin rules where you can choose the balance of Attack/Defence in your combat, & also Enhance rolls at the cost of becoming won out.  I'll probably end up going for a home-brew rule set combining elements from different games.