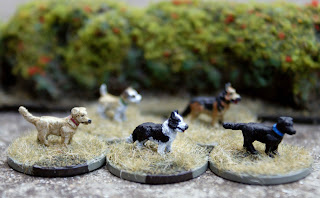 Next up for my 15mm scale zombie apocalypse collection... 5 dogs!  These miniatures are from Peter Pig's Scenery range, & are only 6-7mm tall, but nevertheless very nicely detailed.  There are 3 unique sculpts in each 8-figure pack - I've painted them up as a golden retriever (or yellow labrador), border collie, labrador retriever, terrier cross-breed, & a German shepherd.  They are all mounted on 1p coins, which are flocked using Gale Force Nine dead/winter grass & dirt.  I really enjoyed painting these, & will probably pick up some farm animals to enhance my rural setting. 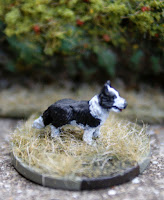 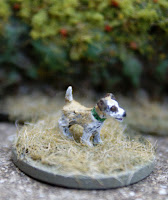 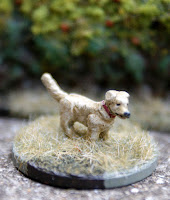 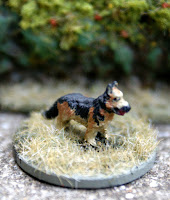 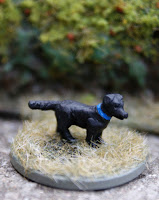 In Ambush Z rules terms some of these could be used as police or Military Working Dogs to sniff-out the zombies/Infected, but I'd like to add some house rules for encountering stray dogs as areas are searched - dogs which may be friendly, or alert the Infected with their barking...  Also, I think a scenario with guard dogs acting as alarms for survivors in a safe house could make for a good game.

I did consider painting one to represent my own dog (a cheeky Alaskan malamute), but it was too sad to think of her in an apocalyptic setting!  In the future I will paint another labrador & a German shepherd, but on desert bases, as MWDs for my Force on Force collection.  If I ever branch-out into Crufts miniature gaming, then I have a decent starting point!  :-D
Posted by Pawn Cocktail at 20:06 14 comments:

More UK police painted for 15mm scale zombie apocalypse this week.  Here is an Armed Response Unit - 12 specially-trained coppers, 6 with SMGs & 6 with assault rifles.  The figures are US SWAT from Rebel Minis.  They are true 15mm scale, & realistically proportioned, which means they look slightly diminutive next to the Khurasan British Police that I painted (particularly the stooping advancing figures with SMGs).  This pack has 20 miniatures, in 4 unique variants - For both the SMG & AR figures, there is a version with & without backpack & lots of pouches. 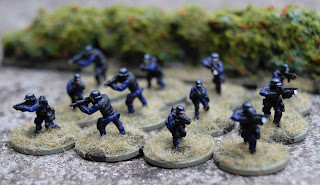 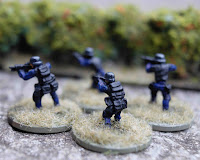 Sticking with 15mm scale, here are a couple more armed civilians for my growing band of zombie apocalypse survivors.  One is a hard-as-nails ex-military survivalist who is in his element, & has managed to get hold of some serious firepower in the form of a SAW (he may look familiar to fans of The Walking Dead...) This figure is from the Khurasan Miniatures 'The Living Set 2'.

The other is a university professor... with a lump hammer!  The original model had a small tool in his hand, but I Green-Stuffed that into a more formidable weapon for dealing with the Infected.  This miniature is from the Rebel Minis 'Civilian Hunters Pack 2'.

As with all my 15mm figures, they are mounted on 1p coins.
Posted by Pawn Cocktail at 19:54 No comments: 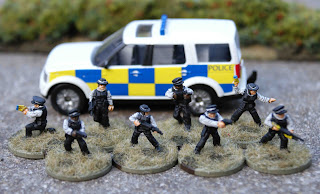 I was back on my 15mm-scale zombie apocalypse project this weekend - I painted a group of police.  Being set in the UK where the police are not routinely armed, & regardless of emergency measures, even in a hypothetical zombie outbreak they would be short on firearms.  So I have painted 2 of these as armed with X26 Taser pistols, & 1 with an X12 Taser shotgun.  The others have been issued with/rustled-up/salvaged/stolen a selection of SMGs, pistols & a shotgun.  I think some scenarios set during the initial hours of the outbreak, with police armed only with tasers & truncheons could be entertaining.  These miniatures are a pack of British Police from Khurasan Miniatures (8 unique sculpts in each pack).  They are very nice minis, but a little chunky & tall (average 17mm high).   The Land Rover is a £2 Corgi die-cast toy, which is roughly the right scale - good enough for small-scale tabletop wargaming at least.

I was in a quandary over how to paint the uniforms for a while - I'm aiming for an 'ultra-modern' setting, & as of 2008 UK police forces have been phasing-in dark blue/black shirts to replace the traditional white button-ups, which were apparently uncomfortable & less utilitarian.  Even the rural police where I live wear the new dark blue shirts.  However, already some forces are considering introducing a white version of the new shirt, due to officers & the public (myself included) preferring the traditional 'less militaristic' smart white shirt.  This, combined with making it easier to distinguish between riot police, Armed Response Units, & common patrol coppers on the tabletop, led me to opt for the iconic white.

I picked up this Hasslefree figure (Miranda) as she had the look of 'innate psyker' to me - with etheric winds starting to blow her hair & dress as she subconsciously draws on the power of the Warp (I'm thinking Jean Grey from the X-Men a bit).  I see this girl/young lady as having the misfortune of being born with high-grade psychic potential (maybe even Beta or Alpha-level potential), & therefore singled out for transfer to the Black Ships of the Inquisition once her powers began to manifest.  Terrified & instead preferring freedom, she escaped & is on the run from the Imperial authorities.  With each escape, her self-preservation instincts have opened up greater power for her to wield, so that without intending too, she has become a serious threat - able to boil a person's blood with her gaze, telekinetically hurl large objects, control people's minds, turn weapons to ash, teleport, summon conflagrations, & all manner of other witchery.  Her ever-increasing power will inevitably lead to her fall to Chaos, being possessed by a Greater Daemon or opening a portal to the Empyrean & it's ravenous, unholy entities, so she must be stopped at all costs, & it will probably require an inquisitor to do so...

I like the contrast this diminutive figure will have when facing bulky, well-armed GW miniatures - untrained witch-hunters such as Guardsmen would initially find it hard to believe that this girl poses a threat.  However, I'm always keen on multipurpose miniatures, so she can also be a regular Human citizen if need be!
Posted by Pawn Cocktail at 22:15 5 comments: