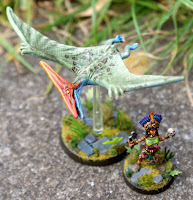 Things have been very busy for me this summer, but I have managed to complete a few small miniatures pieces, including this Terradon for my long-running Lustrian Warhammer Quest collection.  The model is an old Jurassic Park juvenile pteranodon toy (I think it came with the Dr. Alan Grant figure), which was block-coloured in grey & blue, & emblazoned with the JP logo, but which I have repainted with a more interesting scheme - natural jungle camouflage from above, & sky-blue from below, with an orange crest for display (which also mimics my red-crested Lizardmen to a certain degree).  I drilled a hole in its rib cage for the flying stem. 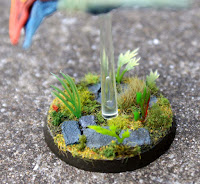 The base was my usual jungle recipe, with snippets of plastic aquarium plants.  I used a spare Battlefleet Gothic transparent flight stem for the illusion of flight.  I drilled a hole in its rib cage for the flying stem.  I left the Terradon unglued from the stem, for safer storage/transport, & also so that the flying base could be used for other aerial creatures if necessary.

Really pleased with how this turned out - saved buying an expensive official Games Workshop Terradon miniature!

At 400 gold for slaying (the same as an Ogre), a Terradon is an early level challenge for the adventuring Warriors.  For comparison, a basic Orc is worth 55g, a basic Lizardman Saurus is 150g, & a Lizardman Kroxigor is 750g.
Posted by Pawn Cocktail at 19:32