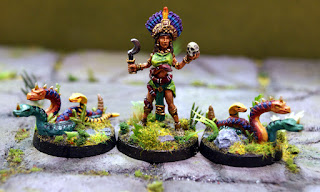 This week I converted & painted a figure as an Amaxon* Serpent Priestess for my Lustria-themed Warhammer Quest collection.  I purchased the miniature via Fenris Games, but didn't want the 'male-gaze' bare breasts & bum look for these fierce matriarchal warrior women - therefore with my limited Green Stuff putty skills, I sculpted a top & skirt.  I'm pleased with the result, which is somewhere between the original 1980s fully-clothed 'punk-Native-American' vibe, & an 'Aztec-jungle-warrior-woman' look.  Initially I instead tried sculpting a hanging fan of feathers around her neck, & then multiple beaded necklaces, but both were too challenging, hence the plain top.  I may yet add a necklace of fangs from my Lizardmen bits though.

The Amaxons of Lustria are said to be descended from the womenfolk of a Norscan raiding camp.  When their barbarian menfolk disappeared venturing into the jungle, they survived & thrived alone, supposedly discovering powerful artefacts amidst ancient ruins which have granted them immortality & negated any need for men in their society.  Although descended from pale-skinned Norscans, I will be painting my Amaxons with a collection more befitting the climate, as they are generations removed... & perhaps the story is a myth - perhaps they were already protecting the ruins of the Old Ones, long before the Norscans (& then the Empire) came to plunder!

Priestesses are part of the religious sisterhood that governs the mysterious Amaxon society, possessing shamanic powers to harness the forces of nature against interlopers in their sacred jungles & Old One ruins - for instance hurling a swarm of bees, calling grasping vines, raising gales, or even escaping threats by turning into a cloud of butterflies.

* = I've chosen to go with the 'Amaxon' spelling rather than 'Amazon', because these matriachal tribes reside on & around the river Amaxon in Lustria, & the spelling is more fitting with that of the Lizardmen cities.