Last weekend I painted this Japanese monk for Ronin gaming.  It's a 28mm-scale Perry Miniature.  He could be used as a harmless civilian traveling monk, but I am planning mostly to use the figure as a kind-hearted warrior monk who has thrown his weight behind the local peasants in resisting the dastardly Yakuza gang.  In rules terms I will tweak the Warrior Monk 'hired sword' profile to allow him to be armed only with a bo, & he would have Bojutsu & Acrobatic as Attributes, making him a skilled fighter with his innocuous staff, less hindered by difficult terrain, & even able to traverse terrain that is impassable to other figures! 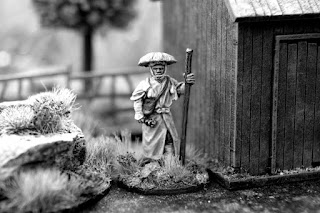 Email ThisBlogThis!Share to TwitterShare to FacebookShare to Pinterest
Labels: Ronin