To be truly complete, my Titan Dwarf army for 15mm-scale Sláine Hordes of the Things will need a Stronghold (I'm going to model a mine entrance defended by the last few dwarves that I have left to paint).  However, here finally is the complete army!  I have added a second titan as an option if two of the dwarf warriors elements are swapped-out in exchange. The default army list is:

Lots of photos of the army after the jump break:

Read more »
Posted by Pawn Cocktail at 16:11 No comments:

This weekend I also finished my first army for Hordes of the Things.  Using 2000 AD's ancient Britain setting of Sláine, I've been working on several standard (24 AP) size armies - here are my Titan Dwarves.  A conmpleted army is a rarity for me - I'm pleased with how these turned out.  Compared to the more barbaric Tribes of the Earth Goddess, the Berzerkers of Midgard, & the Fomorian hordes, these dwarves are a professional army with a good balance of units. The roster is:

I also couldn't resist adding another Titan as an option, if the dwarf player wants to go for a more brutal approach, by swapping out two of the warriors elements in exchange - painting is underway on this second Titan...  Lots of photos after the jump break!

I've been a bit unproductive on the miniatures front for weeks, but this weekend I made these 15mm-scale tree bases for use in Hordes of the Things & 28 Dice Later games.  They are laser-cut ply discs from Fenris Games, each with a 2p & 2x 1p coins glued to the top for weight, before I textured them with several coats of paint thickener. I then drilled three holes in each to insert the cheap ready-made trees, painted them brown, & finally coated them with a special flock mixture which included oregano & mixed herbs to simulate a carpet of leaf litter & fallen twigs.  It's a tip I'd not tried before, but I'm really pleased with the results.  I'll make an area base for these to stand on, so that the trees can easily be removed to allow figure placement within a defined area of 'Difficult Ground'. 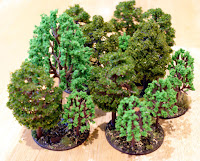 Another element for 15mm-scale Sláine Hordes of the Things finished.  My Titan Dwarf army now has this Behemoth element: an actual Titan.  The Titans in the world of Sláine are the degenerate former rulers of Tír na nÓg (the Land of the Young: a prehistoric, mythical British Isles).  They were once masters of an advanced domain, but while their cousins the Titan Dwarves have retained their intellect (& skills at imbuing weapons with magic), the Titans have dwindled in number & intelligence, becoming little more than slow-witted inbred brutes, their glory days forgotten to all but a handful of their number.

I've painted this Titan wearing shields from my planned Midgard Berzerkers & Tribes of the Tuatha Dé Danann (Tribes of the Earth Goddess, Danu).  The white/blue for Midgard, the yellow-swirls-on-red for Sláine's Sessair tribe, & the yellow/red/white tartan for the Fir Domain tribe. This characterful giant figure is from Copplestone Castings' Barbarica range.  The range has fantastic sculpting - very detailed, with absolute minimal mould lines. 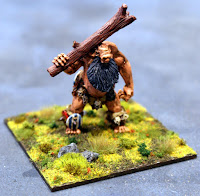 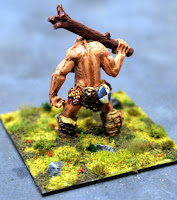 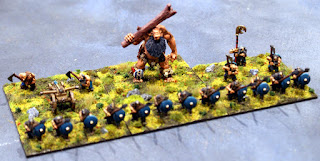 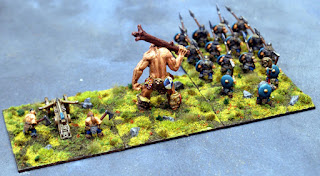 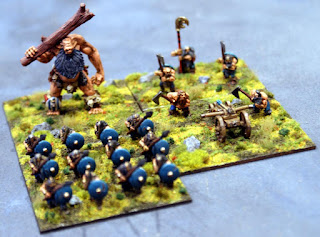 I've finished another element for 15mm-scale Sláine Hordes of the Things.  My fledgling Titan Dwarf army now has this Artillery element.  The heavy weapon is a Dwarf Bolt Thrower from Peter Pig, while the crew are the un-armoured Dwarves from Copplestone Castings' Barbarica Dwarf Command set.

Posted by Pawn Cocktail at 14:13 No comments: 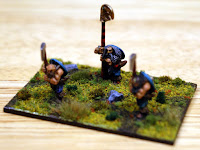 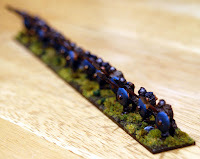 This weekend I finished D6 Giant Centipedes for my Lustria-themed Warhammer Quest collection.  As I couldn't find any sensibly-priced wargaming centipedes of the right scale, I made these using the same tiny rubber novelty ants which I used for my 2D6 Giant Ants - I simply trimmed parts from 3 ants & superglued them together (using Gorilla Superglue, which has a rubber additive) to make each Giant Centipede.  Then I affixed them to my usual jungle recipe bases.  The paint scheme was straightforward, nothing fancy or impressive - I based it on real-life giant centipede colouration.  These have the Venom characteristic, & are a little more challenging to fight than Giant Ants (4 gold each for slaying), Giant Insects (5g), at 30g per base, the same as Snakes.  For comparison a basic Skink is worth 40g, & a basic Saurus warrior 150g.

WQ Stats for foes & creatures from across the classic Warhammer World can be found on the excellent Warhammer Quest Chronicles website.

Apologies for the unformatted tall column of photos, but Blogger appears to have been 'upgraded' to remove the tools for wrapping text around & aligning images :-/ 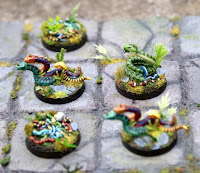